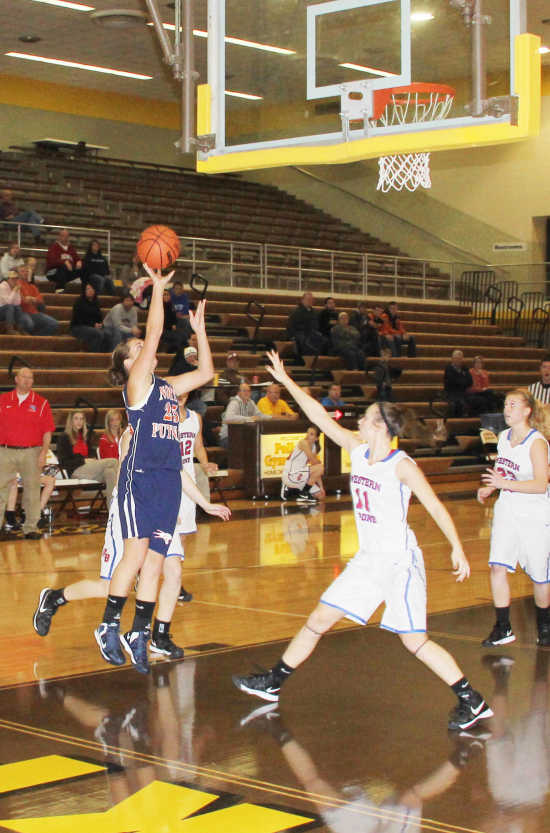 NPHS junior Madi Asbell scores a layup in a game earlier this year. Asbell finished with 14 points in the win over Fountain Central. (Banner Graphic/GRANT WIEMAN)

North Putnam rode on the shoulders of junior Bethany Wiatt who took the game in hand with a season-high 21 points.

The game started out slow with the score tied at 10 after the first quarter. Both defenses were giving the opposing offense trouble.

"I thought we played awesome defensively," North Putnam coach Curtis Lawrence said. "We have had two great defensive games in a row against Arlington and tonight against Fountain Central."

The second quarter was a back-and-forth battle between the two teams, with each forcing 10 turnovers in the frame.

The team also emphasized its renewed focus on inside scoring in the second, matching the Mustangs inside.

"The last couple games our focus has been to get the ball inside by either feeding our post players or dribble penetration." Lawrence said.

North trailed by a point, 23-22, at halftime, but came out fired up in the second half, outscoring the Mustangs 33-22 following inermission.

More than half of Asbell's points came at the line, where she made eight free throws. The performance highlighted a night in which the Cougars got to the line 24 times, making 17.

Senior Sam Lucas led the defensive effort in the paint, forcing Linley Smith, the Mustangs' best post player and leading scorer Thursday, to foul out with three minutes left in the game.

The Cougar coach credited his team's consecutive wins to a more disciplined approach to offense.

"Prior to the game against Arlington we were taking a lot of outside shots and we were only making seven or eight shots a game," Lawrence said.

The Cougars took only one three-pointer on Thursday.

"We have changed our focus."