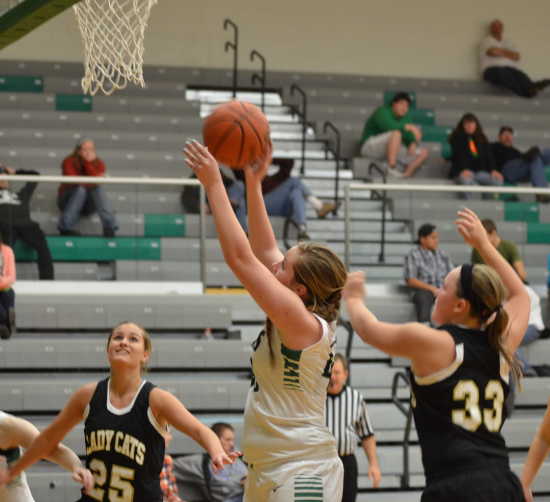 Cloverdale senior Katie Walters shoots a layup against South Vermillion. She finished seven points for the Clovers in the win on Thursday. (Banner Graphic/TRENT SCOTT)

CLOVERDALE -- After Cloverdale's girls' basketball squad picked up its fourth win back on Dec. 3, the team probably did not expect to wait another month before picking up its fifth win of the season.

The Clovers appear to be back. They handed a heavy defeat to South Vermillion 51-33 to kick off 2013 on the back of an extremely stingy second half of play.

"They wanted to get back on track tonight and it was a full team effort," Cloverdale head coach Matthew Langdon said. "There were good things all around and I can't single out anything because it was widespread."

Cloverdale started the game quickly, taking a 9-3 lead midway through the first quarter.

Just as fast as the hosts shot out, however, the scoring touch deserted them and moved squarely to the Wildcats.

A 12-2 run gave the visitors a 15-11 lead heading into the second quarter and, after scoring the first basket of the new period, SVHS seemed to have Cloverdale on the ropes.

For the remainder of the half, however, South Vermillion would not add to its tally.

"It felt like, in the second quarter, the intensity dropped a little bit and we could have been in the same situation as the other games," Langdon said. "I thought how we finished the second quarter was huge for us. We don't always finish quarters well but we ended on a 7-0 run, turning a four-point deficit into a three-point lead at half.

"That was big mentally for the girls."

The hosts closed the quarter with another seven-point run to take a 25-22 lead into halftime and came into the second half with a stifling defense that allowed only two points over a span of 12:47 of game time.

"We went to a man-to-man defense because of South Vermillion's shooters and that helped us win the game," Landgon said. "We got in their faces and forced a lot of turnovers."

With SVHS unable to find a way past to the basket, Cloverdale took a 35-22 advantage into the fourth quarter and completed the rout in the final frame.

The Clovers pushed the lead out as far as 21 points before the Wildcats scored the game's final basket in the dying seconds as Cloverdale started 2013 with its fifth win of the season.

Langdon said afterwards that the new year provided a chance to clean the slate.

"We talked about getting a fresh start," Langdon said. "It's always tough going through a five-game losing streak. We start to feel like we're not going to get that next win."

Langdon said the defense was great, even though it was not what the Clovers had prepared to do going into Thursday's game.

"We were surprised that it was man-to-man defense that worked," he said. "We had planned to go back to a 2-3 zone that we had done at county. We worked on that all week.

"We made adjustments based on the team in front of us and the change got them aggressive. I think it woke them up a little bit."

The win gives Cloverdale a chance for its second set of back-to-back wins this season when it travels to West Vigo next Monday.

Langdon said he wants the squad to carry over the aggression into its next game.

"Hopefully this is the start of a good run. I think there are some very winnable games on our schedule," he said. "(The West Vigo game) will come down to who plays better defense and who plays with that aggression. Hopefully we can take this momentum into next Monday and keep it going."