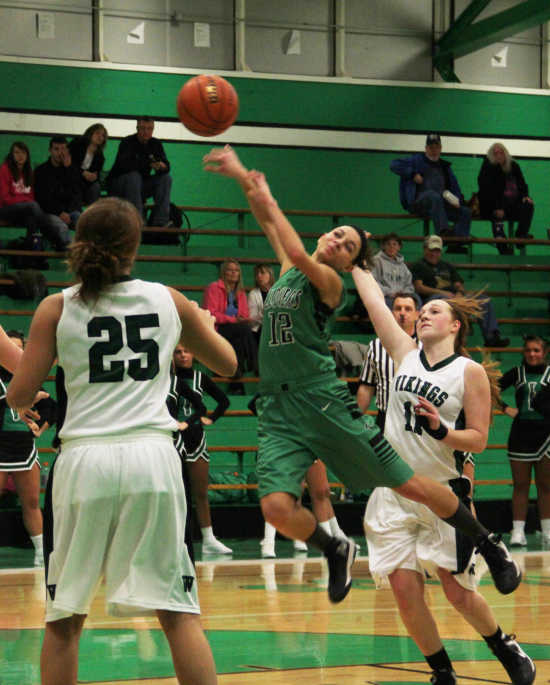 Cloverdale senior Amillia Nally draws a foul driving to the basket late in the fourth quarter of the team's loss to West Vigo on Monday. (Banner Graphic/GRANT WIEMAN)
Order this photo

WEST TERRE HAUTE -- As the Cloverdale girls' basketball team continues to make strides toward success, they must deal with tough losses.

Such was the case Monday when the Clovers lost a heartbreaking game to West Vigo, 38-37.

Cloverdale took over the lead in the second quarter, maintaining it until last in the fourth, but despite phenomenal defense and effort, the squad couldn't make a shot when it needed to.

"It's tough because you're so proud of the girls for battling," Clovers coach Matthew Langdon said. "We've not talked to the girls about some of our close games, but those close games have been seven, eight point losses. Tonight we stayed in there mentally and battled all the way to the end."

CHS had numerous chances to seize the game, but couldn't convert.

They made only 2-of-11 free throws in the fourth quarter, missing their last five.

Senior guard Amillia Nally made numerous defensive plays down the stretch, getting two late steals and attacking the basket.

Syndey Shrum, a senior who led the team in the first half with her scoring, pulled in four late defensive rebounds in traffic.

Cloverdale struggled in the first quarter, making only 2-of-10 shots and trailed 9-4 going into the second, but they caught fire.

The Clovers (5-10) shot the ball with their most confidence all season, stepping up for each open chance as soon as it was presented.

"I think we go a lot with confidence," Langdon said. "When we're confident with the ball, everything improves for us. We're not a great shooting team, but it usually keeps us in the game. When we just handle the ball confidently, we're a different team."

For all the good in the first half against West Vigo (4-10), there was also the bad.

The Vikings hauled in 23 rebounds to the Clovers' 12 and made up for a turnover disadvantage by capitalizing on several of their 12 second-chances.

West Vigo junior Lexis Elkins had eight of her game-high 13 rebounds in the first half, five of them on the offensive end.

Cloverdale's shooting confidence remained, but the shots stopped falling in the third quarter.

Tough defense kept the Clovers ahead, but Charity Lane scored all nine Vikings points, on three-of-four three-point shooting, in the third, trimming the deficit to 30-29.

Senior Paige Gruener and Shrum each scored to extend the lead to four points with 6:16 left. The pair finished with team-high 11 points each.

Beginning at the 4:30 mark, the Vikings scored on three of their next four possessions, taking a two point lead with 2:28 left on freshman Kylie Cardinal's shot from the high post.

Gruener got to the line and trimmed the deficit to one, but another three from Lane followed with 1:54 left.

Cloverdale got to the charity stripe with 1:08, but missed both free throws.

They battled for the board, gaining possession back.

Senior Bristy Skiles worked herself open in the left corner and sank a three with :54 left. The Clovers trailed by one.

Nally got a steal and drew another foul.

She missed the pair, then stole it back again.

Gruener missed. Cloverdale got it back.

Nally pushed the ball up the court with 15 seconds remaining, worked it around the perimeter, then took a three from the top of the key.

It rimmed out, and Cardinal was fouled after getting the rebound. She missed on the front end of the one-and-one. Shrum pulled in the rebound with three seconds left and pushed it up court to Gruener, but she couldn't get a shot off from half court.

Monday's game was only the second one-possession contest the Clovers have played this season. The first was a three-point win over Union (Dugger) on Nov. 8.

"It's tough to fault the girls," Langdon said. "It's one that was fun to be a part of. It's fun to be in these types of games now. It's just not a fun one to be on the other side of it."