Fountain Central offense too much for Cougars to keep pace 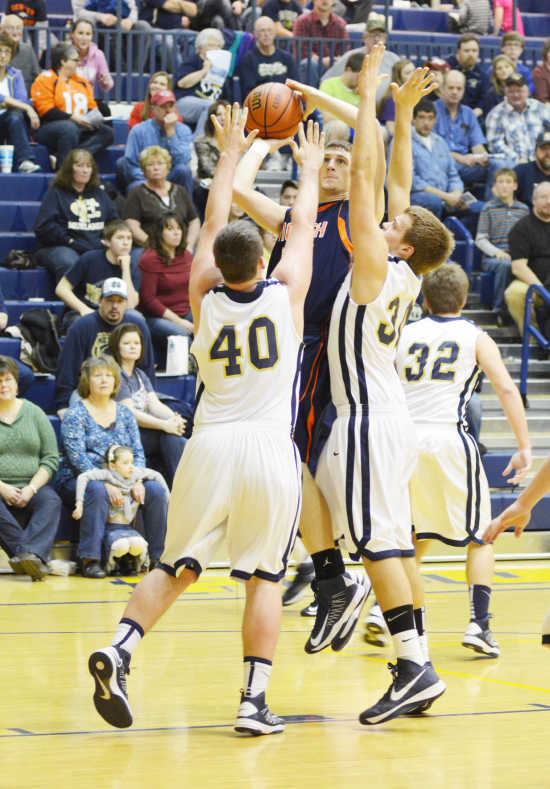 North Putnam senior Jameson Brewer fights through a double-team to get off a shot against Fountain Central on Saturday. (Banner Graphic/TRENT SCOTT)

VEEDERSBURG -- Defense had been the word of the day Friday when North Putnam's boys' basketball squad traveled to Monrovia.

Saturday night, the Cougars found their offense at Fountain Central.

At the same time, the Mustangs got a handle on their own scoring touch and outpaced the visitors 74-57.

The hosts stated their intent immediately when Koby Pierce hit a three-point basket on the opening possession.

North Putnam responded to each Mustang shot, keeping pace throughout the quarter with Jordan Nauert and Jameson Brewer each sharing the load.

Brewer's three closed the gap to 12-10, but Fountain Central center Ethan Woodrow stepped back and immediately hit a three of his own.

The gap steadily grew from there as the Mustangs shot 67 percent from inside the arc, no matter what defense North Putnam threw at them.

The Cougars did not back down and continued to put points on the board at a steady clip.

Jake Haste put in eight of his team-high 23 in the period as the visitors' passing opened up scoring avenues for the North Putnam senior.

"We had scoring options from all three players, which made us more efficient on the offensive end," Martindale said. "We were able to establish a post game through Jake, who had a great game for us tonight. Jameson was seeing three or four guys at a time tonight, so he had to react to situations.

"We finally got a little bit of an outside threat from Jordan."

But while Haste, Brewer and Nauert were all in double figures, the rest of the squad combined for two points on a solitary Bennett Hazelgrove basket.

By halftime, Fountain Central led 44-29 and began to slow the tempo of the game down as North Putnam looked for ways to cut into the deficit.

Haste continued to put up points in the third quarter, chipping in eight more points, but where the Cougars forced Monrovia into difficult shots the night before, Fountain Central knocked down seemingly anything they threw towards the basket.

North Putnam began a full-court press in the fourth quarter that initially seemed to frustrate the Mustangs but, as they had done all night, the hosts found avenues to keep scoring.

"Defensively, we tried to switch up things and do a lot of different things," Martindale added. "Fountain Central simply shot us out of whatever we were in. They had four or five guys on the floor at a time that can shoot. It was similar to last night when picking what to defend.

"Any time a team has a four and a five player than can step outside and shoot a three, along with three guards that can shoot, you have to tip your cap to them. That's a good ball club."

Unable to find answers to Fountain Central's offense, the Cougars fell at the final buzzer but Martindale saw many good signs from the squad.

"I thought our offense was much more crisp," Martindale said. "There are a lot of games this time of year but the experience of being in games like the last two will help us out tremendously.

"We've played two good ball clubs this weekend. We can learn from these games, raise our game and become better in the coming weeks."

With the rescheduled match-up with South-mont on Tuesday, and a West Central Conference game at Cloverdale on Friday, Martindale said the squad will keep pressing on.

Next Game: North Putnam travels to Southmont for a rescheduled game Tuesday.