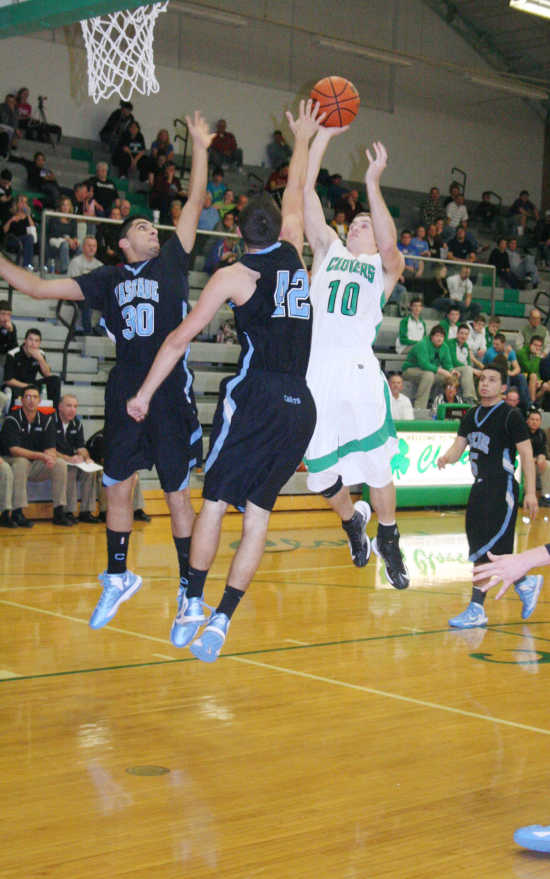 CLAY CITY -- Perseverance finally paid off for the Cloverdale Clovers on Saturday night.  Brandon Dorman hit a three-point shot from just outside the free throw circle with 1.1 seconds left on the clock to give the Clovers a 74-73 victory over the host Clay City Eels.

"I can't say enough about the resilience (of this team) and how we stuck together as a team and we played as a team," Cloverdale coach Pat Rady said.

"And the other three (Brandon Dorman, Kedrick Collet, Brandon Hughes) scored 11 (together), so we had five in double figures," Rady pointed out.

Clay City was led by Blake Cesinger, with 21 points, 13 rebounds and several assists.

"I thought we did a good job of staying in front of them (on defense). But (Blake) Cesinger's tough. He's a great player. He's got a savvy about him," Rady said.

With 10 seconds to play Clay City took a 73-71 lead when Cesinger penetrated and dropped a pass inside to Josh Miller for uncontested layup.

As the clock ticked closer to Cloverdale's ninth straight loss, the ball arrived at the top of the key and Brandon Dorman had no choice but to shoot it.

"There was no play (called). We were running Ben Davis (offense), but he didn't get it," Rady said. "(Brandon Dorman) was in a position where the ball does come to him and he hit it. But you've got to be ready to go when there are broken plays. You hope that guys feel they can do it."

Dorman's unscripted game-winning basket gave Cloverdale an unlikely victory. Everything was stacked against the Clovers.

Cloverdale started the night playing on the road with an eight-game losing streak; playing a Clay City team on a four-game winning streak, including a win over Class 2A power Eastern Greene on Friday night, and to top it all, the Eels were celebrating homecoming.

And when Clay City built a 39-27 lead midway through the second quarter, there was every reason to believe Cloverdale was warming up the bus for a quiet ride home.

Instead of retreating, the Clovers dug in. CHS switched to a man-to-man defense that kept Cesinger from penetrating and dishing out open shots to his teammates. By doing that, the Clovers held the Eels scoreless over the final 4:08 of the second period.

Meanwhile, at the other end of the court, Cloverdale attacked the basket with a 12-0 run, starting with three Pfaff free throws.

Hughes came off the bench to net two points, Zach Dorman hit pair of free throws and Schroer hit a three to bring the Clovers with two, 39-37, at halftime.

Clay City's Trevor Singer and Evan Rogers combined for 27 points in the first half, but were scoreless in the second against the Clovers' man-to-man defense.

Schroer hit a trio of three-point baskets in the third quarter as the Clovers took a 57-54 lead into the fourth period.

The score was tied 66-66 with 3:48 left in the game. The Eels scored, and Cloverdale answered.