Tigers get another overtime win, advance to 13-6 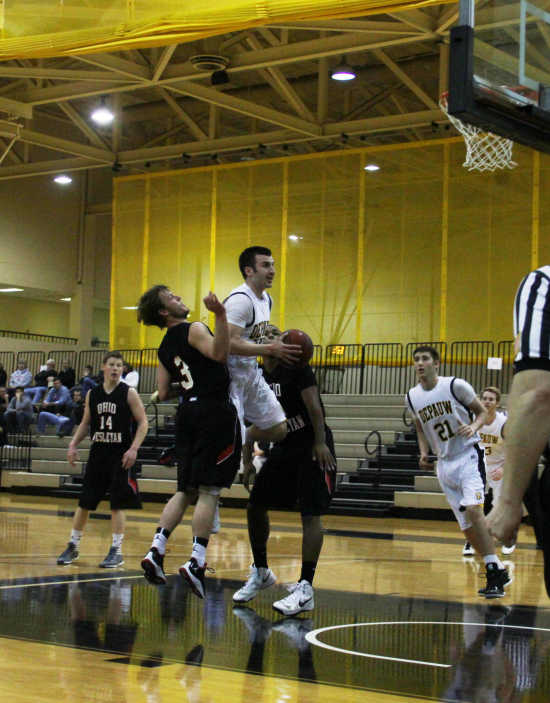 DPU junior Michael Wilkison readjusts his shot mid-air to complete a lay-in for the Tigers against Ohio Wesleyan on Saturday.(Banner Graphic/GRANT WIEMAN)

Sophomore Connor Rich sank a pair of free throws for the winning points, but the final action was set up by contributions from junior Michael Wilkison and senior Kevin Sullivan.

Down four points with less than a minute remaining in regulation, the Battling Bishops advanced the ball.

"We just needed stops," DPU coach Bill Fenlon said. "We never got to the point where we were going to foul. We were probably one possession away from that, and then Kevin made that play and changed everything."

Sullivan poked the ball loose at the top of the key, jetted for it, and went to the rim.

"I saw (Andy) Winters coming with the ball. He kind of had it loose and I thought I could get a hand on it and tip it free before he came off the screen," Sullivan said. "That's what I did. I tried to get to the ball as fast as I possibly could and get to the hoop.

"I kind of felt (Claude Gray) trailing behind me and I tried to slow down. He's a pretty good shot-blocker so I tried to fake him up and get fouled."

Sullivan got buried on his way up, and when the referee signaled for an intentional foul, senior Vaughn Spaulding doubled their problem by arguing the call and earning a technical.

"All I felt was him coming down on top of me," Sullivan said. "I don't know if it was intentional or not, but I know that he got me hard."

DPU, down four with 54 seconds left, had four shots from the line then got the ball back.

Wilkison sank the first two for the tech, then Sullivan stepped up and made his pair to tie the game.

The Tigers worked the ball around and Wilkison lined up for a go-ahead attempt with 29 seconds left.

It rimmed out, but freshman Adam Botts flew in the grab an offensive rebound. With the shot clock off, DPU worked the ball around the perimeter, eventually settling for a jumper by senior Barry Flynn that missed to usher in overtime.

Wilkison and Sullivan combined for another big play late in overtime. The Bishops controlled the ball in a tie game with 40 seconds left.

Wilkison poked it loose, causing the ball to roll to the Tigers' offensive end. In a scramble for the ball, Sullivan came from nowhere to dive on it then tossed it up to Wilkison as he fell to the floor to avoid a traveling call and save possession.

"I saw Mike get a deflection," Sullivan said. "I thought I had as good a chance as any to get on it. I just dove for it and I think I landed with it right on my chest. It popped me up and came right into my hands and got the ball back."

Adding to the intrigue, Sullivan was playing in his first game back since suffering a shoulder injury on Jan. 5 against Hiram.

"That guy, Kevin Sullivan, he's always going to be in the middle of something," DPU head coach Bill Fenlon said. "That's kind of his thing. He's a really high-energy guy ... and he made some plays.

"The one where he saved possession (in overtime) was an unbelievable play. There's not that many guys that sell out that hard for a ball, and that's why he separates his shoulder and he's always hurt all the time.

"He's always selling out, and we needed that today."

The Tigers took possession out of bounds, then sophomore Connor Rich drew a foul with five seconds remaining.

He sank both, sandwiching a potentially icing-timeout, and Taylor Rieger's three-point attempt rattled out at the buzzer, securing the win for DePauw.

It was the second overtime victory this week for the Tigers. The team beat Wittenberg on Wednesday night when Alex Payne sank a jumper as time expired.

The win was the Tigers' fourth straight and their sixth in the last seven.

DePauw is back in action at Wabash on Wednesday at 7:30 p.m.