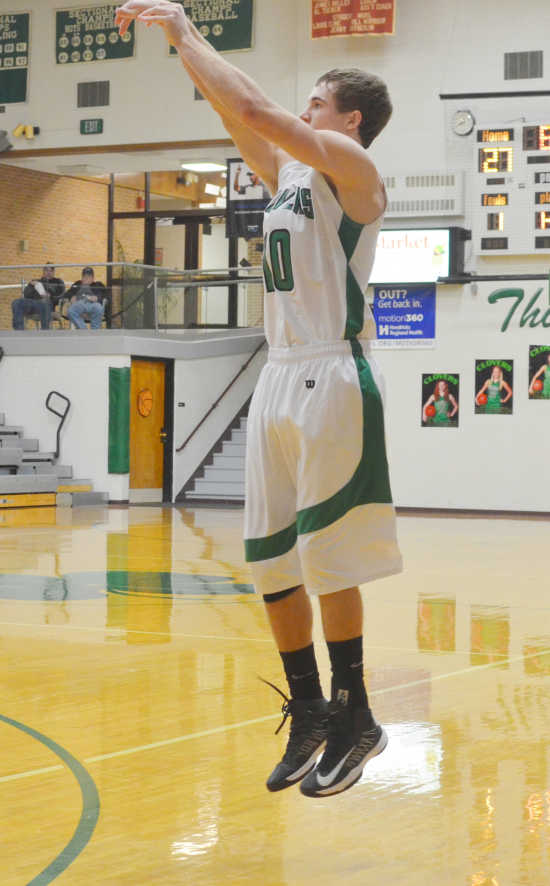 CLOVERDALE -- A night after being confronted with an up-tempo South Putnam squad, Cloverdale's boys' basketball team was presented with a much slower and deliberate game against visiting North Vermillion.

The game accelerated as the Clovers took the lead early and held on through a turbulent fourth quarter to pick up their fourth win on the season 64-56.

The hosts started off quickly with six straight points to open the game, a lead that the Clovers would maintain by the end of the period at 13-7.

The Falcons, a squad that could not be confused for South Putnam's physical lineup, played a slow offensive game, one in which possessions would last for nearly a minute at a time.

Cloverdale rarely needed such time for its own offense as the hosts repeatedly attacked the basket, mixing drives from junior Brandon Dorman and senior Brody Pfaff with low-post feeds to junior Zack Dorman.

The plan did not need fixing as the Clovers built on their six-point lead to take a 27-16 lead into halftime.

North Vermillion tried to clog the lane in the third quarter, only to watch Pfaff go over the top, nailing three three-point baskets to build Cloverdale's lead to 44-30 as the final quarter began.

That gap was cut in half inside the opening two minutes of the fourth behind seven straight Kody Zumwalt-points.

Though the hosts slowly built the lead back up, the game became a battle of attrition as the Falcons fouled to put Cloverdale on the line 16 times.

The Clovers were 12-of-16 in those attempts and, though they gave up 26 in the final quarter, held on for their first win in two weeks.

Cloverdale head coach Pat Rady was impressed with the ability of the squad to bounce back after the loss to South Putnam Friday night.

"I was pleased with the way we came back tonight," Rady said. "I thought our offense still played pretty well and the defense was good at times.

"After a real tough game last night, a lot of times it's tough to get going. I thought we came back with a real good attitude and desire.

"I thought our ball movement was good tonight. We scored a lot of points and I was pleased with the overall team effort."

While the game was firmly in Cloverdale's control for most of the night, Rady said that some of the play in the final quarter needed work.

"We relaxed on some of the shooters," Rady said. "We had some guys in foul trouble who were reluctant to play defense.

"They got some good shots against guys who had four fouls. The players need to learn to still play defense with four fouls."

With Turkey Run as their only game next week, Rady said the Clovers needed to continue their progression in the back half of the season.

"We hope things keep building," Rady said. "We had a good week of practice and we're pleased with that and the effort we've had the last two nights.

"We have to come back Monday hard, with an attitude of working and getting better. It's simple improvement.

"It doesn't take a rocket scientist to keep improving each day. There are no secrets; it's about keeping working and getting better and that's what we aim to do."