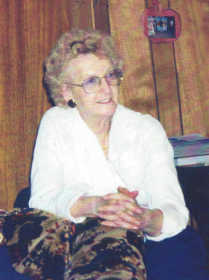 Born June 22, 1929 in Greene County, she was the daughter of Carl Dexter and Agnes (Flater) Pearson.

Gretchen worked at REMC for 19 years in customer service.

She was preceded in death by her husband Fred Bray, whom she married on Jan. 3, 1985, brother Carl Dexter Pearson and her parents.

Friends may call from 4-8 p.m. on Wednesday and noon Thursday until the hour of service at Jenkins Funeral Home, 421 S. Seminary St., Bloomfield.

Services will be at 1 p.m. on Thursday at Jenkins Funeral Home in Bloomfield with Rev. Jim Sanders officiating. Burial will follow at Grandview Cemetery in Bloomfield.

The family asked any donations be made to the Lyons Health & Living Center in Lyons.

Online condolences to the family can be made at www.jenkinsfuneralhomes.com.