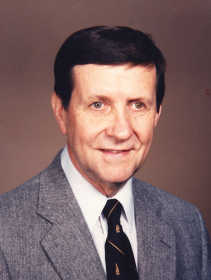 He was an Army Air Corps veteran, having served in World War II and was a technical sergeant serving on the Gold Coast of Africa.

John attended Martin College in Pulaski, Tenn., where he met his wife, Nancy (Elliott) McFarland, sharing 65 years together; she preceded him in death on May 31, 2012.

John furthered his education receiving his bachelor's degree from DePauw University, his PhD from Vanderbilt University, Nashville, Tenn., and his post-doctoral study at Massachusetts Institute of Technology.

He was employed as a research chemist with DuPont Chemical for six years in Wilmington, Del., prior to coming to DePauw University. He taught in the Chemistry Department for 33 years, retiring emeritus in 1994.

During his career at DePauw, he also served as assistant dean of students, chemistry department head, and pre-medical/pre-dental advisor. John had also served as pastor in the Methodist churches in Carbon, Fillmore, Canaan and Bainbridge.

John was a member of the Gobin Memorial United Meth-odist Church, Phi Beta Kappa Fraternity, Kiwanis and a member for more than 50 years of the American Chemical Society. He had also been active with Habitat for Humanity.

He was preceded in death by his parents, wife, four sisters and two brothers.

The family will receive friends on Friday, Feb. 1 from 3-8 p.m. at Bittles and Hurt Funeral Home, Greencastle.

Memorials may be made in John's name to the local Habitat for Humanity or Kiwanis.