NASHVILLE -- Coming off a game where it didn't play it's best, the Greencastle girls' basketball team rebounded in the sectional semifinal with a dominating 71-35 victory over South Vermillion, setting up a showdown with Edgewood in the final tonight.

On Tuesday against West Vigo, Greencastle came out flat and struggled to get things going, but Friday was entirely different. The Tiger Cubs stormed the court and made their presence known from the opening tip.

Aggressive play on both ends of the court allowed Greencastle to bolt out to a 13-0 lead to start the game. Junior Alex Basile scored seven of the team's first 10 points to lead the way.

"We really talked, in the locker room, about, when we're at our best, it's because our defense leads us there, and our defense is really what got us going," Greencastle head coach Brad Key said. "Alex Basile got a quick steal and got a two-pointer and then from there the ball rolled the right way for a while.

"We liked the good start. We were down 0-5 or something to West Vigo and we were down 0-7 to North Putnam, so a quick start was nice. It was good to be on that end of it today."

Greencastle scored 25 point in the opening quarter and piled on 17 more in the second quarter to take a commanding 42-22 halftime lead.

The only hiccup in the Tiger Cubs' game came in the third quarter when the Wildcats were able to outscore them 11-7 and trimmed the lead to 49-33. But as they had in the quarterfinal, Greencastle unleashed a 1-3-1 defense that suffocated the South Vermillion offense in the final period.

In the fourth quarter, seven different GHS players posted points as it outscored the Wildcats 22-2 in the final frame to punch its ticket to the sectional final.

Greencastle had several players step up in Friday's contest and Key liked the attitude and play his team displayed in the game.

"Callan Taylor had 16 and I never would have guessed she had 16," Key said. "Lenihan didn't play a ton of minutes today. We got her a little more rest by plan if we had the lead. Four players in double figures and Taylor Stoltey right there with nine and Shelby (Earl) had seven. It was a good game.

The Tiger Cubs will face Edgewood in the sectional final, a team that has knocked them out of the playoffs for each of Key's four seasons as coach.

Unlike past sectionals, Key sees one big difference between those teams and this year's squad and he hopes it's a difference that will bring a sectional championship back to Greencastle.

"Lauren Bridgewater had 10 and she came off the bench and knocked down some threes. Shelby Early came off the bench and is a great player and Jessi Covert, a senior, understands the game as well as anybody we have. We have that bench if we need it, and experience has taught me, 'You need a bench in a sectional game.'"

Greencastle will face Edgewood in the final tonight at 7:30 p.m. The two teams met up on Dec. 1 with the Tiger Cubs prevailing 44-35. Key hopes the Greencastle cheer section rivals the Mustangs, despite the longer travel time.

"We hope we can get some Greencastle people to make that drive tomorrow night. It's a lot easier to come from Ellettsville or staying here in Brown County, so we would like all the Greencastle people to invite their friends, family, foes -- I don't care who you invite, we need people here," Key said with a laugh. 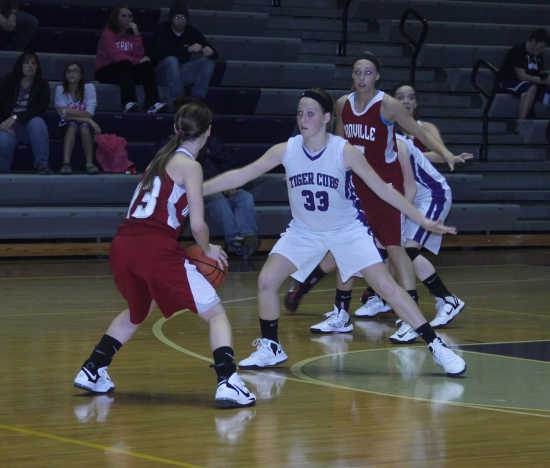 GHS sophomore Taylor Stoltey (33) plays defense in a game against Danville earlier this year. Stoltey scored nine points on Friday and her athleticism will be key to stopping Edgewood in the sectional final tonight. (Banner Graphic/GRANT WIEMAN)