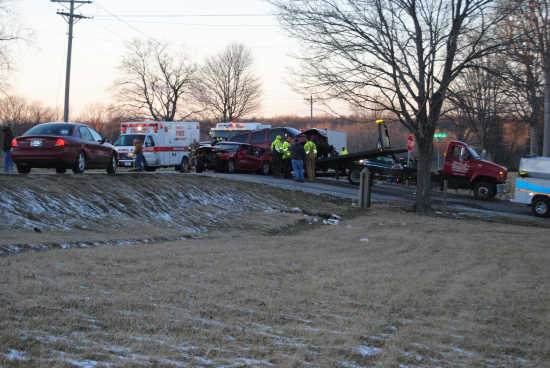 An SUV gets hauled onto a tow truck after a three-car accident occured on Friday evening at U.S. 231 and CR 900 North. The incident resulted from a driver's obscured vision which caused one vechile to enter the northbound lane and hit head on with another vehicle. Two injured in the car wreck were sent to Putnam County Hospital and two others were airlifted to another hospital. Below is the extensively damaged is the vehicle that entered the northbound lane and hit head on. No names of victims were available from police at presstime.

On Friday, Feb. 15 a three-vehicle car wreck on U.S. 231 left four people hospitalized with two being airlifted from the accident site.

The accident occurred south of Fincastle around 5 p.m. when a 2004 Yukon driven by Brian Kamplain of Greencastle hit a Pontiac Grand Prix driven by Amanda Millican of Bainbridge and sent the vehicle into the northbound lane on U.S. 231. 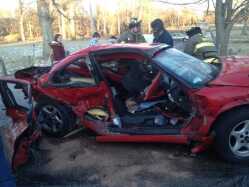 A witness statement indicated Kamplain was blinded by the sun as he came up behind Millican's stopped vehicle in the southbound lane. Millican's vehicle was pushed into the northbound lane and then hit head on by a third vehicle driven by Joy Owen of Cloverdale.

At the accident scene emergency workers were helping to contain the scene after a gas spill was detected and to help the injured parties.

Two of the people involved in the accident were sent to Putnam County Hospital, while two other were airlifted to an unknown hospital. 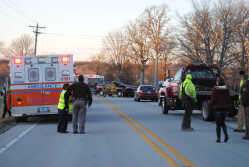 Millican was also transported to a hospital with complaints of pain over her entire body. Owen was taken to the hospital with similar pains.

The conditions of the four victims were unknown at press time.