SPENCER -- The best compliment South Putnam junior varsity coach Chris Jones could pay to his team after Friday night's double-overtime game at Owen Valley was the kids were thinking on their feet.

Coming off a timeout with 10 seconds to play in the second extra frame, the Eagles had prepared for the Patriots to come out in man-to-man defense.

Finding the Patriots in zone, they went into a standard zone set and then made a game-winning play.

"You gotta give the kids credit for getting that set up on the fly," Jones said.

On the fly, point guard Derrick Mitchell drove toward the bucket and drew the defense to him before dishing to Jacob Schroer on the left wing.

Two defenders lunged toward Schroer, but he was open enough to drain a three-pointer to put the Eagles up 37-34 with two seconds to play.

"Derrick Mitchell penetrated to get a good pass to Jake Schroer, who knocked down a big shot," Jones said.

Owen Valley had time for a desperation heave and got a good look, but the shot was a little strong, giving the Eagles a three-point victory in a game that delayed varsity action by at least 20 minutes.

Aside from the big shot at the end, Schroer was the Eagles' leading scorer with nine points, followed by Mitchell with seven and C.J. Menke with six.

Jones liked the way his team played in extra time after blowing a five-point fourth-quarter lead to even get to overtime.

"It was good to see the kids get through some adversity in the fourth quarter and get some stops in overtime to finally get a chance to win it in double overtime," Jones said.

Just like the Eagle varsity, the JV will be gunning for its first winning season in a number of years with Tuesday's home game with North Vermillion.

Heading into their season finale, the JV now sits at 9-9 on the year.

The Eagles host the Falcons at 6 p.m. with the varsity game to follow. 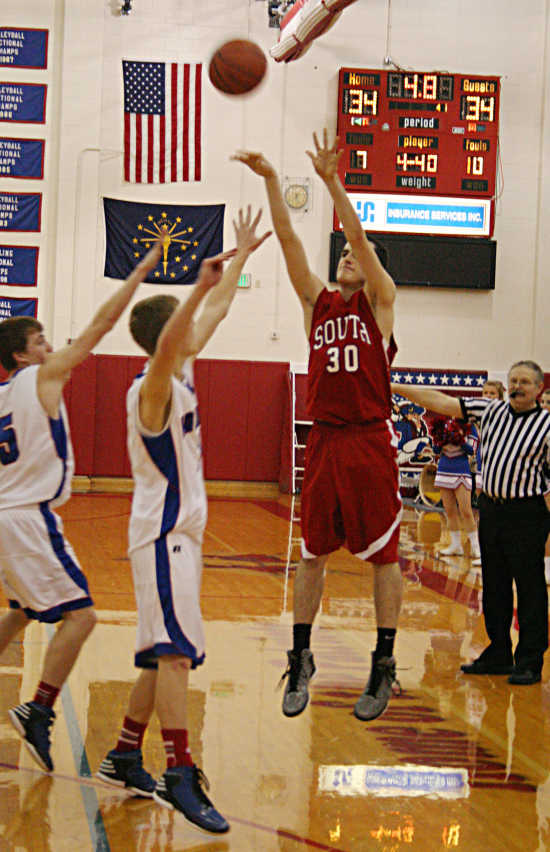 South Putnam's Jacob Schroer knocks down a three-point shot with time running out in the second overtime to win the JV game at Owen Valley. (Banner Graphic/JARED JERNAGAN)