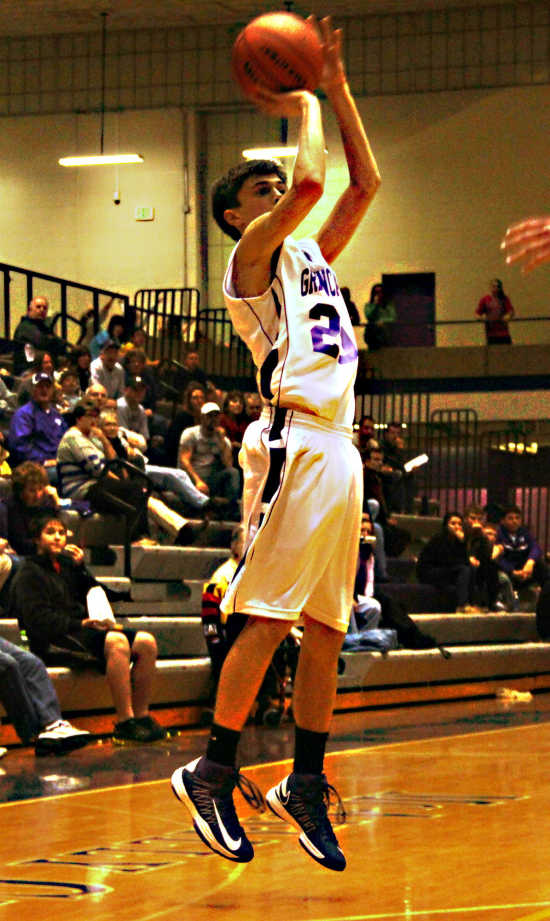 Greencastle sophomore Colyn Foxx shoots a three-pointer in a game earler this year. Foxx had five points in the loss to Southmont on Friday. (Banner Graphic/GRANT WIEMAN)

CRAWFORDSVILLE -- The Greencastle boys' basketball team traveled to take on the Southmont Mounties on Friday night, going home with a loss, 63-42.

The Mounties were led by junior Devon Burton, who led all scorers with 23 points.

Burton hit four threes on the night and had an outstanding 13 points in the first quarter, and had 19 at the half.

Greencastle got off to a slow start but managed to keep it close most of the night. The Tiger Cubs were led by junior Holden King, who paced the squad with 10 points.

The Tiger Cubs could not get much going against Southmont in the entire game. Southmont pressed the Tiger Cubs deep into the fourth quarter and made the visitors uncomfortable.

GHS did not shoot the ball very well, shooting only 25 percent while the Mounties shot 49 percent.

Greencastle head coach Troy Greenlee thought that next week the team would have to work on offense to get ready for sectionals.

"We have to pass, cut, and move. We stood around way too much tonight and watched their teammates dribble the ball," Greenlee said.

The Mounties press forced 17 turnovers in the first three quarters. The Tiger Cubs seemed to solve the scheme early in the fourth quarter and turned over the ball just once in the final period.

Greencastle did play with a lot of effort and heart, showing that in bursts. Senior Nick Gilliam and sophomore Anthony Mitchell ran down and dove for numerous loose balls.

"Offensively we were bad all night," Greenlee said. "For some reason we did not play with any kind of purpose. We tried to play too much one on one instead of moving the ball and getting the defense out of position."

The Tiger Cubs gained some momentum -- and looked like they had a chance to get back into it -- after sophomore Holden King started to hit threes, but the Mounties pulled away each time.

Southmont got momentum flowing at the end of each the first and the second quarters.

At the end of the first Burton banked in a long three-pointer to extend the lead to 10, and he almost did it again in the third.

Right at the end of the half senior Alex Stewart tipped in a missed shot by Burton as time expired to extend the lead to double digits.

The Tiger Cubs, coming off a big win against Northview on Tuesday, hope to get back to tiptop shape in time for sectionals. They'll have two games next week to figure things out.

"We need to get ready to play. It was disappointing considering the win we got on Tuesday night," Greenlee said.