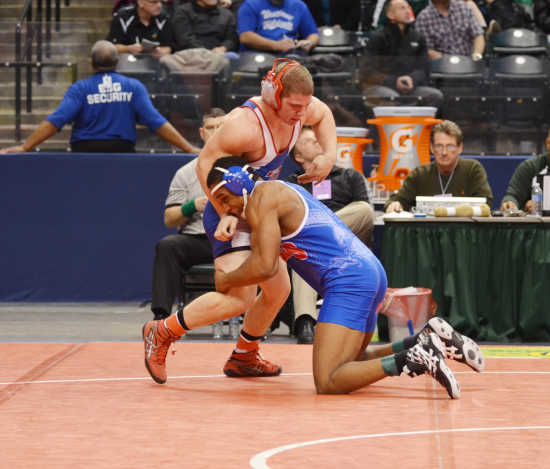 South Putnam junior Rudy Harris tries to will his opponent, Roncalli senior Mason Nickell, to the mat in the state finals match on Friday. Harris couldn't get an advantage and lost 10-3. (Banner Graphic/TRENT SCOTT)

Harris, matched up against Indianapolis Roncalli's No. 7 Mason Nickell, fell in the round of 16 by a score of 10-3.

Nickell was able to take Harris down early in the opening round but could hold him down only briefly before the South Putnam wrestler escaped.

Harris, however, was caught by Nickell and tossed, sending Harris to his back and nearly taking a near fall with seconds left.

Harris held out but trailed 7-1 after the end of the first period.

Escaping to start the second period, Harris could not find a way past Nickell's defense and again was taken down and trailed 9-2 after two periods.

Nickell escaped to start the third period but began to sit back and Harris eventually picked up a point through a stalling call.

Harris nearly got Nickell on the ground twice, but the Rebel senior landed out of bounds twice and South Putnam's representative at the state final ran out of time in the match and the season.

Harris ends the year with a record of 34-6 and a sectional and regional title to his name.

The South Putnam junior, however, was equal parts melancholy and fired up afterwards.

"I feel disappointed, but I'll be back next year," Harris stated. "It's going to take a lot of hard work and training to do so. But I'm going to work hard and I am going to do better next year. I want to get past the first round and I'm going to win."

South Putnam head coach Josh Hendrickson said that the match was again one that could have gone either way from the outset.

"Obviously, it's disappointing that we didn't come out on top," Hendrickson said. "I thought Rudy went out there and laid it all on the line against a big, strong kid.

"Nickell didn't do everything we thought he might but it was enough to win the match."

Hendrickson did say that having Harris at the state meet would help boost the squad for the next season.

"The publicity is great," Hendrickson said. "Having a state qualifier coming back is great for us. We have a lot of junior high kids working hard and we're only losing three seniors. They are three guys that have been with us for a while, but we've got a lot of guys coming back too.

"We'll definitely have a strong senior class next year. It's exciting. I think we'll have another solid season next year and for years to come. We'll keep getting better."

Harris, though disappointed at the result, added that the feeling of competing in front of the crowd at Bankers Life Fieldhouse is one that he wanted to repeat.

"It's a good opportunity for us to be out in the public eye and have South Putnam noticed, but for us, we need to keep doing our thing," Harris said. "It was also a great opportunity for me to see how the state meet was and I like it.