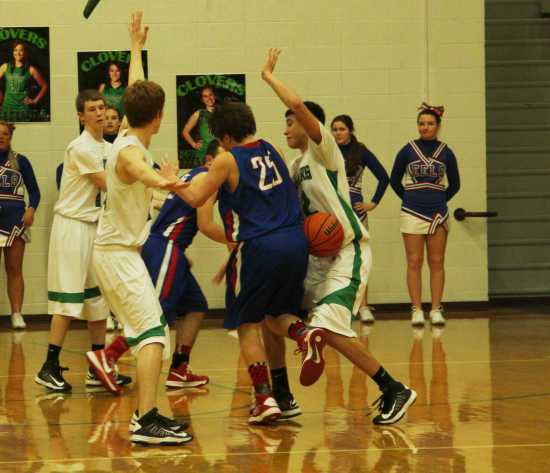 Cloverdale juniors Kedrick Collet (right) and Brandon Dorman trap Eminence sophomore Brennan Ringler (25) in the closing seconds of the game. Collet stripped the ball loose to get a steal and prevent a final shot to secure the win. (Banner Graphic/GRANT WIEMAN)

CLOVERDALE -- The Cloverdale boys' basketball team hosted Eminence on Friday, looking to get a win on a senior night and enter the postseason with some positive momentum.

The Clovers jumped out to a 15-point lead at halftime, then held on for a win in the closing seconds 57-54.

It was a solid overall effort for the 6-14 squad. Junior Zach Dorman had 22 points, 13 rebounds and three blocks before fouling out in the final minutes.

"The last four games we've had things that we have done well," Cloverdale head coach Pat Rady said. "I think the defense is getting to where we want it to get."

The Clovers did just that, holding Eminence to only 19 first-half points. The Eels have averaged 51.6 points per game coming in.

Though defense wasn't an issue, holding on to the ball was. CHS turned the ball over 25 times, including 11 in the fourth quarter that allowed Eminence to get back into the game.

Senior Nick Szalay came off the bench to score 19 points, grab 14 rebounds and get a pair of steals for the Eels. Junior Ethan Holley had seven points and seven steals.

"We made some mistakes just playing hot potato," Rady said. "They had to foul us, and we made passes before they got to us. And it was trying to get the ball into places that just weren't there."

The Eels cut into the deficit, scoring 24 points in the fourth quarter and getting as close as two.

Sophomore Brantson Scott was sent to the line for a pair of free throws with 12 seconds remaining. He made the first, taking a three-point lead, then missed the second.

Szalay missed a three-point try to tie the game, but the Clovers turned the ball back over with 1.5 seconds left.

Szalay threw it in toward sophomore Brennan Ringler, but Cloverdale junior Kedrick Collet was there to strip the ball away and run out the clock.

As the Clovers begin preparing for sectional play, they'll look for ways to simulate playing with a lead so games like Friday don't come back to haunt them.

"They were putting a lot of pressure on us, and we've just got to realize that pressure and take advantage of it," Rady said. "We've got some drills that we'll use to try to simulate that, but it's tough to try to simulate another team's quickness."

Cloverdale will learn its next opponent Sunday when the Indiana High School Athletic Association sectional pairings are announced. 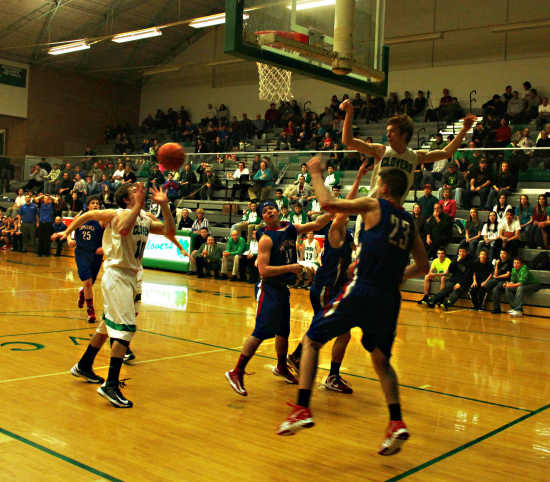 Cloverdale junior Brandon Dorman dishes one of his five assists to senior Brody Pfaff in the fourth quarter on Friday against Eminence. (Banner Graphic/GRANT WIEMAN)