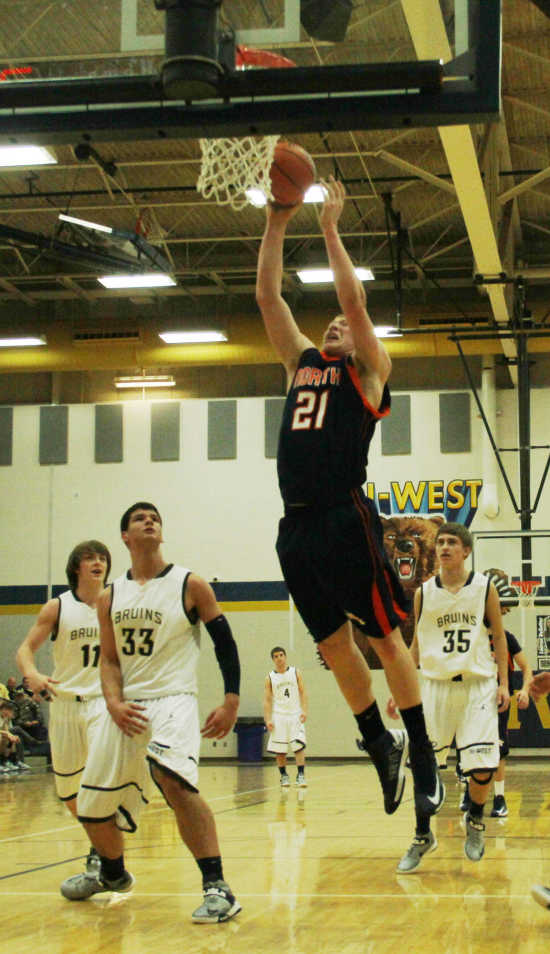 LIZTON -- The North Putnam boys' basketball team's six-game winning streak came to an end Saturday with a 82-53 loss at Tri-West.

A run through the basketball postseason requires winning seven consecutive tournament games. That's a long streak for any team, especially with the competition building after each win.

Carrying a win streak into postseason play could be more burdensome, but don't tell that to NPHS coach Nathan Martindale.

"We want to win every game, but this is an experience that we can say, 'We got tougher. We got better. We're going to heighten our level of play because of this game,'" Martindale said. "This is a learning experience for us on how physical this can be and we didn't react to the physicality very well, so that's something we can learn from this game."

The Cougars will get one more chance to get momentum entering the playoffs, Tuesday at North Montgomery, but the 29-point loss Saturday may have sullied some of the gains the Cougars made during their late-season streak.

NPHS returned to some of the bad habits against the Bruins -- attempting too many threes, committing fouls, letting the opposing guards to penetrate to the basket -- that led to a 2-10 start.

"When you play a game against a team like this -- that has beaten the Danvilles and all these other, bigger schools -- this is a game for us to be able to say, 'OK, this is our measuring bar. Let's heighten it up. Let's ratchet up our defense,'" Martindale said. "On the defensive side of the basketball, that's where we struggled. We couldn't contain (Trevor Waite). He had a lot of easy looks in the first half. We just didn't have the legs to keep up with him."

It began as a physical contest that degenerated into a foul-plagued debacle around the start of the fourth quarter.

NPHS was coming off a tough game at Covington Friday night, and as the squad is still without junior point guard Shane Beaman, the shortened bench began to become evident.

The Cougars trailed 16-15 after one when the Bruins upped the pressure and dipped into their depth.

"They're a team that can go 10 deep, and we do not have the depth to match up with that a lot of times," Martindale said. "For the first quarter, we were really able to play well. I thought we did a nice job. They brought in some new guns and we were still sticking with our old ones.

"A team like that, when they've got that kind of depth, they're trying to wear you down in the full court."

The one-point deficit turned into 16 by halftime, and the Cougars got frustrated.

Senior Jameson Brewer was called for a technical foul shrugging off his obnoxiously physical defender, and Martindale picked up a technical himself arguing with another call a short time later.

Tri-West has been working its opponents with depth and physicality all season, and it proved to be a winning formula Friday as well.

The Cougars never got into an offensive groove and couldn't seem to find a hot hand.

The Bruins were led by sophomore Trevor Waite, who scored 30 points on only 11 shot attempts (7-11 from the field, 15-18 free throws). Waite also had three assists and four rebounds.

For the Cougars, bouncing back Tuesday at North Montgomery would provide a big boost before sectional play.

NPHS will begin postseason play with a bye before taking on the winner of the Lebanon-North Montgomery opening-round game on Friday, March 1 at Frankfort at 6 p.m.