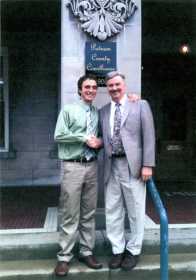 Local attorney Darrell E. Felling has announced that his son, Darrell "Eddie" Felling II, has joined his legal practice serving Putnam County as well as all of west-central Indiana.

The soon-to-be-created firm will now fly under the banner of Felling and Felling LLP, making the family owned and operated legal firm even larger.

Although Eddie has only been formally practicing with his father Darrell as an attorney for the past several months, he has assisted his father in legal, agricultural and wildlife management ventures from a very young age.

"I love my Dad's practice," Eddie Felling has said, "and I hope to carry on his tradition of helping members of our community with almost any needs they may require legal or otherwise.

"Dad and I plan on expanding our primarily criminal law practice into the areas of real estate, bankruptcy and small business law," the younger Felling added.

With the addition of Eddie, the newly created Felling and Felling LLP practice now officially has four members from the same family.

In addition, Eddie's longtime girlfriend, Amy Walter, plans to join the firm at the beginning of March.

Presently the Fellings' office is located at 106 S. Indiana St., Greencastle. However, the practice will be relocating by mid-March to allow for the Stellar Communities Grant parking garage project to be built on their present office site and adjoining property.

The Fellings' new legal office will be in the historic Granada Opera House building they are purchasing on the west side of the courthouse square at 12 N. Jackson St.