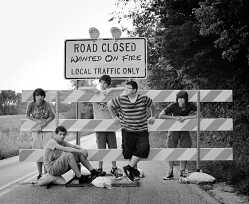 In less than two years, Wanted on Fire, a five-piece consisting of (from left) Derek Query, Alex Briones, Dylan Bodnarick, Nathan Pearson and Justin Hartman, has gone from a classroom conversation to a band with its own record stocked with original songs.

One such group of high school students learning the hard work that is rock 'n' roll is Wanted on Fire, a group five Greencastle High School underclassmen.

The band, consisting of Alex Briones on lead vocals, Justin Hartman and Derek Query on guitar, Dylan Bodnarick on bass and Nathan Pearson on drums, plays a youthful, energetic brand of alternative rock.

Things started two years ago when the band members were all still middle schoolers.

Bodnarick and Hartman were in yearbook class together when they found out they were both musicians. They decided to start playing together.

Pearson, a drummer without drums, came along next.

Beyond the lack of drums, Pearson came to the band without any actual training.

Since then, he's entirely self-taught, which is remarkable when listening to the band's debut EP "Inhibitor."

The drums are far from the only thing impressive about the record, though. It's a set of five original songs with all the energy you expect from a teenage band, but nothing amateur-sounding about it.

CDs are available from band members and at the Greencastle Music Center. The songs are also available for purchase on iTunes.

The crafting of their own originals was a conscious change of direction a year or so ago when the band went through a lineup change -- replacing their original singer and rhythm guitarist with Briones and Query.

"After our first singer left, we decided to change it up," Bodnarick said of the addition of original songs to the repertoire.

The change of direction bore fruit with the completion of "Free Man," their first original song. While it isn't a track included on "Inhibitor," the song remains a source of pride for the members.

"I was really happy with how 'Free Man' turned out," Pearson said.

As with anything, the band has found that writing more songs has helped them grow as songwriters and artists.

"Once you write some songs, it get's easier," Bodnarick said. "We have a variety of different influences. It's kind of cool when you come together and write songs."

Even with the songs written, though, they find performance and even rehearsal opportunities limited, one of the hindrances being high school freshmen and sophomores.

"Sometimes it's hard to get it (rehearsals) scheduled, but we usually make time," Hartman said.

These sessions happen in the Hartman family basement, scheduled around soccer, basketball and swimming practices, among other activities.

Wanted on Fire does find time, though, to hone their playing and songwriting as a band.

"You just have to get together, play some stuff and just do it," Bodnarick said.

Finding places to perform for an audience can also be difficult, as so many music venues are bars. Lack of access isn't the only problem, though.

"Getting around people saying, 'Oh, they're just kids' is hard," Bodnarick said.

"And we can't just drive cross country (to play a show)" Hartman added, "because our parents aren't big fans of that."

Their parents are big fans of their sons, though, supporting them and hauling equipment around for them.

Gigs the band has made include the 2013 End of the Line Music Festival, the 2012 Owen Valley Battle of the Bands (which they won), the 2012 Indy 500 Mini Marathon, the Putnam County Fair, The Fluttering Duck and Rhino's all ages club.

The band can be booked by contacting Jessica Hartman at 720-0636 or jjharman08@yahoo.com.

They have also been honored in the 2012 Maroon 5 TopBlip Contest as the eastern division winners and as the X103 Band of the Week during December.

The honors are nice, but the band members are mostly striving to be a better band.

"I think the next thing for us is to do what we have been doing and then branch out further," Hartman said.

"We can only get better from here," Pearson added.

As the first song on the record says, this band is "Just Getting Started."