Tigers sneak out a comfortable win 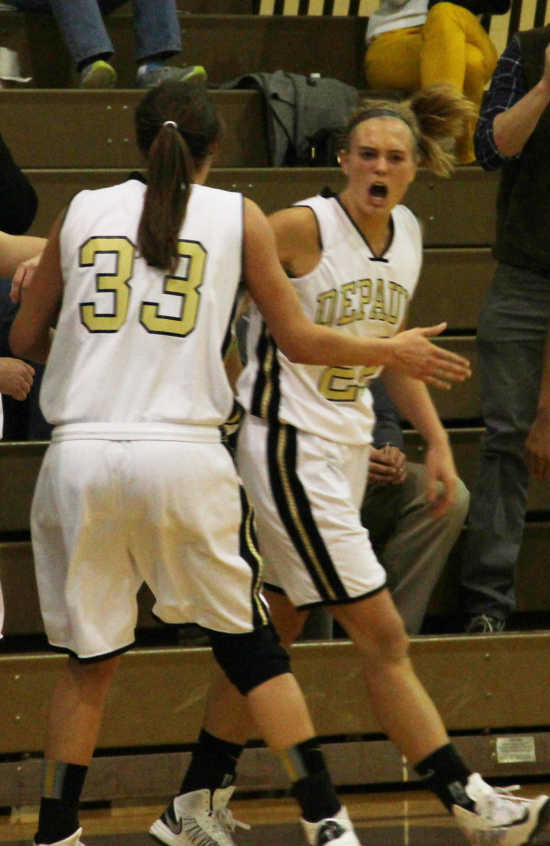 Friday's North Coast Athletic Conference semifinal women's basketball game between DePauw University and Wittenberg University was the closest blowout No. 1 DPU has had all season.

The hosts, DePauw, are used to easy victories and the final score, 66-43, appears like it was just that.

But playing with leading scorer Alex Gasaway took DPU more than a half to figure out.

DPU led just 26-24 at the break and, though it came out with more energy in the second half, it took one spectacular play to turn the tide.

With DePauw up by eight after a three-pointer by senior Kate Walker, senior Ellie Pearson ripped the ball away from Wittenberg senior Kim Replogle. Pearson went coast-to-coast, finishing the layup and getting fouled.

Wittenberg called a timeout with DPU up 36-26 and 15:51 remaining, but by then it was too late. The hosts had their swagger back.

DPU played like it has for much of the year -- with overwhelming confidence -- and finished off the game with momentum that will carry it to the NCAC finals against Kenyon.

Point guard Walker took up the scoring load with Gasaway out, netting a career-high 19 points on 7-of-12 shooting, making her first three three-point shots of the night.

"I just went out there and played and it happened to be a good game for me," Walker said. "I guess with Alex out all of us had to step it up a little bit more."

Gasaway, a junior, missed the game with what appears to be a significant right knee injury and will potentially be out for the remainder of the season.

Junior Alison Stephens proved to be a capable replacement, stepping into the starting lineup and leading the team with seven rebounds.

"I felt bad because Alex definitely deserves to be out there, so I was just trying to keep her in mind the whole game," Stephens said. "I tried to play my same game. I didn't try to do too much extra. We all had to step up a little bit, but I didn't try to play out of my role."

It was the second tough game DPU has played against Wittenberg in the last nine days. DePauw snuck out a tough, eight-point win on the road last Wednesday and finished the year 3-0 against the NCAC's other Tigers.

"We have a very sticky team," Walker said. "That's what we call it. We lost Alex, but we all came together and we were able to pull through."

"It was tough to play without her; she's been such a big part and we know how she's hurting," Huffman said. "They want their teammate back on the floor, so they feel terrible for her."

The top-ranked Tigers will play Kenyon on Saturday night at DPU with a 7 p.m. start time.