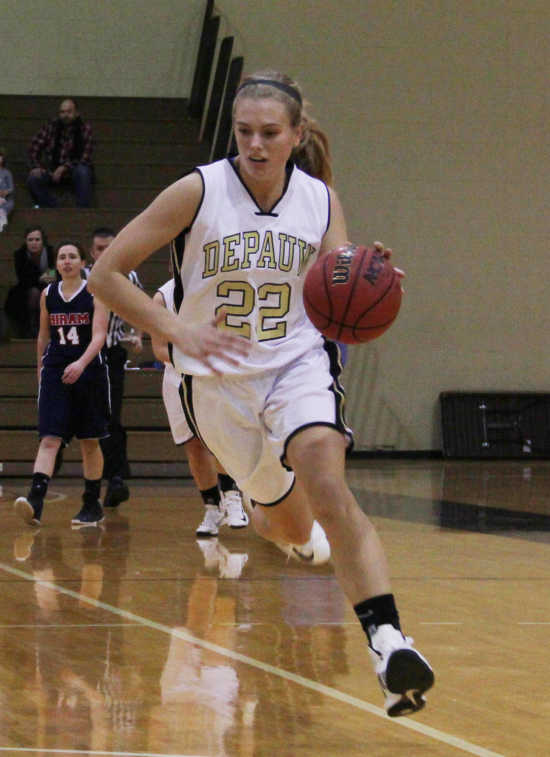 Not all champions are created equal. Some win with offense, some defense. Sometimes it's just the right combination of chemistry and skill.

For the No. 1 DePauw women's basketball team, every aspect of the game has been championship-caliber this season.

DPU head coach Kris Huffman has seen this setup before. It happened in 2007, when the squad won the NCAA Championship.

"They're not a mirror image, but they're very, very similar," Huffman said. "Alex Gasaway in the middle of our offense is much like Liz Bondi, our All-American then. About the same size, a similar type of game.

"We had great depth. We had a tremendous senior point guard in Suzy Doughty. We had the chemistry. We had strong defense. This team this year might have a little bit more versatility with the offensive sets we've put in."

Lets take that one thing at a time, Gasaway first.

She injured her knee in practice last week and while Huffman has been quiet about the details, she did seem to imply Gasaway is still part of the plan this year.

"Alex Gasaway, I think, is having an All-American type of season," Huffman said. "She's a great leader at practice. She's an extremely hard-worker. She's so hard to defend, and I think that's what makes her so special.

"She can shoot the three, post you up or take you off the dribble. We don't have another person that has that combination. We have people that do some things extremely well, but she's a special player on offense."

The statistical similarities to Bondi and Gasaway are glaring. In the championship year, Bondi averaged 15.7 points and 5.9 rebounds. Gasaway averages 14.1 and 6.5. Bondi was the team's MVP. Gasaway will likely be awarded that title as well.

Though she'll have competition, and that's part of the DPU depth.

"This team is built on depth," Huffman said. "We have great depth. I think how we performed last weekend (without Gasaway) was inspiring. They lost one of their leaders and I thought they played extremely well."

The Tigers went 10 or 11 deep all year (more when the wins got out of hand), often playing key minutes of games without a starter on the court.

Junior Alison Stephens, the team's second-best rebounder (6.5 per game) filled in with Gasaway out.

"Alison Stephens has been one who really has been a gift," Huffman said. "She plays much like Ellie (Pearson) does. She has a motor that doesn't stop. Her ability to rebound on Saturday night against Kenyon was huge for us. She had a big bucket in the game, and how she stepped into that starting role, I really give her a lot of credit. She was ready to play."

On to the senior point guard.

Kate Walker sets the pace for the Tigers and enters the tournament with 108 assists.

It's a career high for the senior but if DPU can make a run, she'll have a chance to get the second-highest total in school history.

Doughty set that record -- 177 -- during the championship season, and Walker is seventh on the list now. She needs 35 more assists to move into second-place.

Walker and the other seniors -- Pearson and Kathleen Molloy -- help fuel the Tigers' chemistry.

"The seniors have been outstanding leaders -- Kate and Kat and Ellie," Huffman said. "I like how this team has progressed. We've had people step up and have great individual performances this year, and then we've gelled really well as a team."

DePauw is sixth in the country in opponents points per game (44.7), and it allows just 35.2 percent shooting.

Junior Ali Ross and Mollow take turns shutting down the other team's top perimeter player and Pearson, the teams' starting center, is athletic enough to step out and match-up with perimeter players.

The Tigers can guard, but they can also score in a variety of ways.

They've got four players making at least 39 percent of their threes, including Walker's stunning 58.1 percent total. Gasaway, Pearson and Stephens can score inside. More than half of the team's field goals have been off an assist (413 of 750).

DPU is a championship contender, but the Tigers have been here before.

Maybe not exactly here. They haven't been undefeated entering the NCAA tournament before. But they've hosted first-round games and been a favorite. That happened just last year.

DPU won on Friday last year, then lost in round two to Carthage.

"I think everyone has that in the back of their mind as motivation. There's certainly no guarantees at this point in the season," Huffman said.

No guarantees, except for hard work.

Pearson said it's been fun being No. 1, but the team hasn't let it get to their head. It's more of a target on their back than a badge of honor. At least for now.