Tigers ready for NCAA, with or without leader Gasaway 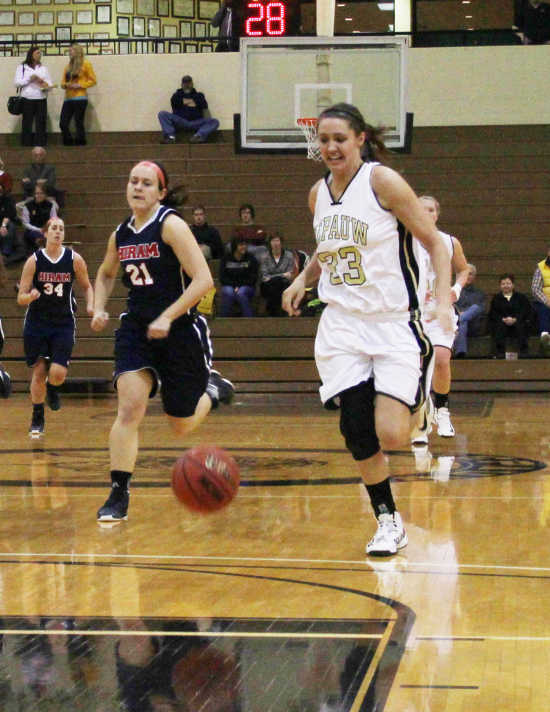 DePauw junior Alison Stephens chases down a fastbreak pass in a game last week against Hiram. Stephens stepped into the starting lineup and has kept the team moving forward. (Banner Graphic/GRANT WIEMAN)
Order this photo

The DePauw women's basketball team has been ranked No. 1 since the first poll of the regular season. They're undefeated (28-0) entering the NCAA tournament on Friday and will host at least the first two rounds.

But things haven't been easy for the Tigers lately. The team struggled in a game at Wittenberg late in the regular season and, after the first round of the North Coast Athletic Conference Tournament, lost starting forward Alex Gasaway to a knee injury.

Gasaway, a junior recently named first-team all NCAC, is the team's leading and most versatile scorer and may be able to defy expectation and return this postseason.

The Tigers responded last weekend without her, winning the NCAC with junior Alison Stephens stepping into the starting lineup, but in the past week many have questioned whether they can continue to be as successful without Gasaway.

"I think when Alex went down with her knee injury, I think maybe it removed the expectation from us," DPU head coach Kris Huffman said. "We're still going to try to take care of business (Friday) night."

The extent of Gasaway's injury has not been revealed, but rumors that she may have torn her ACL may be just that.

"She practiced a little bit (Thursday)," Huffman said. "She's an option for this weekend."

The Tigers are hoping they won't need her. DPU opens the NCAA tournament against La Roche College (26-2) at 7 p.m. The Lady Redhawks are making their third-straight NCAA appearance after winning the Allegheny Mountain Collegiate Conference Tournament last week.

La Roche is a talented, athletic team, but the Tigers hope to have answers. With four double-digit scorers -- and a conference player of the year in Jessica Pitts -- the Tigers will have to rely on its defense.

"I don't know that I've seen anyone as fast with the basketball in her hand," Huffman said of Pitts, a 5'9" forward who leads the Redhawks in rebounds, assists, steals and field goal percentage. "Hopefully we can mix up our offenses to maybe keep them off balance. And I hope out pressure defense can have an impact. That's yet to be determined.

Pearson and Ross said they are trying not to carry the expectations and success of the regular season with them into the tournament.

The Tigers go beyond the cliché, not just saying that it's a new season, but truly believing it.

"Everybody is zero and zero right now," Pearson said. "I think our previous season gave us confidence going into this season -- it wasn't too shabby of a year; we're proud of it -- and we're excited to see where our hard work will take us."

The previous season, as far as the DPU players are concerned, ended with last week's NCAC tournament.

Ali Ross (32), a junior at DePauw, defends her opponent at midcourt in a game earlier this year. Ross will be matched up La Roche's leading scorer, Casie Cygan, on Friday. (Banner Graphic/GRANT WIEMAN)
Order this photo

"It feels like a new season," Ross said. "I liked the last season but the tournament is a whole different ball game. You're playing teams you've never seen before. It's a good way to keep ourselves on our toes."

While the DPU players admit knowing very little about their opponent ("We know they're from Pittsburgh," Pearson said.) they also said film study this week has shown them it could be a tough game.

"Some people on the team look at the roster and Facebook them, but basically we just watch film to prepare," Ross said.

"Coaches really stressed to us all week that this is not about their record," Pearson said. "It's a new season and it's all about match-ups. Their style of play could give us a run for our money. We'll just have to find out (Friday)."

After bowing out in the second round as host last year, DPU is taking nothing for granted.

The goals are the same -- to win the tournament-- whether Gasaway is active or not.

The Tigers face a strong region. The nation's only other undefeated team -- No. 5 Montclair State -- is in the bracket, as are ranked teams Washington University, Lebanon Valley and Baruch.

DPU's closest game of the year, a 60-59 win, came against Washington in November. The Tigers will have a target on their back as the top seed.

It's the first time the Tigers have entered the postseason as the undefeated favorite, but Huffman said she doesn't see that as any added pressure.

"I suppose we should, but because we don't talk much about our record or our rankings, just one possession at a time and that's how we'll approach the game (Friday) night," Huffman said. "We don't emphasize records and standings. We're just getting ready to play another game, so I'm not feeling the pressure. I hope our team isn't feeling the pressure."

Whether Gasaway is able to come back or not, the Tigers aren't worried. The top-ranked squad is hoping it can turn the biggest adversity it has faced this season into an advantage.

"I think we're playing with a little extra edge," Pearson said. "When I'm out on the floor I want to play for my teammates, but I want to do it for Alex more than anything. She should be out there with us. It's motivating and it's kind of a cool story."