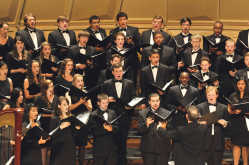 The DePauw Chamber Singers and University Chorus, conducted by Gregory Ristow, will present a concert of Psalms and spirituals on Thursday, March 7, beginning at 7:30 p.m. in Kresge Auditorium of the Green Center for the Performing Arts.

The DePauw University Chorus and DePauw Chambers Singers, conducted by Prof. Gregory Ristow, will join forces for a concert on Thursday, March 7 beginning at 7:30 p.m. in Kresge Auditorium of the Green Center for Performing Arts.

The program pairs three Psalm settings with several American compositions and arrangements of traditional spirituals. The singers will be accompanied Thursday night by pianists Amanda Hopson and John Clodfelter.

"It's exciting to be able to perform such a wide variety of choral music on one program," Ristow, director of choral activities at DePauw, said. "From the esoteric, scholarly nature of the Bach to the traditional spirituals; it's nice to have a little something for everyone."

Psalm settings by J.S. Bach, William Billings and Johannes Brahms make up the first half of the program. All three compositions are set to similar texts but hail from varying time periods.

The DePauw University Chorus will perform the works by Bach and Billings.

In addition to the Brahms, the DePauw Chamber Singers will present Randall Thompson's "Americana," a setting of humorous texts from the late 1800s. The song cycle is composed in a 20th -century musical art style known as "News Items," mimicking the layout, content and format of newspapers. Thompson includes excerpts of letters to and responses from the Evening Graphic's psychic medium, who relays advice from those beyond the grave.

The concert concludes with three well-known spirituals, arranged by the great American choral conductor Robert Fountain. The three songs, which include "Sometimes I Feel like a Motherless Child," "Deep River" and "Roll Jordan Roll" will be sung by the DePauw Chamber Singers.

General admission tickets for the Thursday choral concert are $3. Tickets for all students, seniors and children are free. Anyone wanting to attend a music event, who cannot afford to pay full ticket price, can also take advantage of the school's pay-what-you-can option.