GHS's Gierke to play in Paris as member of AFW Elite 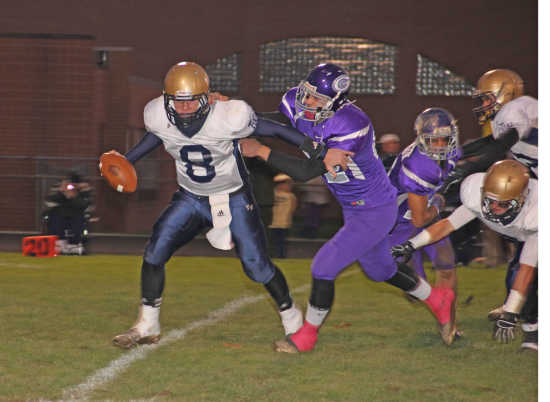 Greencastle senior Brett Gierke picks up one of his 11 sacks in a game last fall. Gierke has been selected for the US U19 national team, which will play a game in Paris, France later this month. Gierke has committed to play for Wabash in the fall. (Banner Graphic/CAINE GARDNER)
Order this photo

MOLINE, Ill. -- Greencastle senior Brett Gierke will represent the United States as part of the American Football Worldwide ELITE team in a game against the national U19 team of France scheduled to take place in Paris on Saturday, March 30.

"Playing for team USA is such a privilege and I'm honored to represent the stars and stripes," said Gierke, who played defensive end for Josh Buis' Greencastle team this past fall.

Gierke helped fortify the defense for the 11-1 Tiger Cubs. Their defense was the top-ranked team in the state in fewest points allowed per game. Gierke himself was a force as he piled up 11 sacks, good for ninth most in the state. For his efforts, he was named to the Region 6 and Wabash Valley all-star teams and was an all-county selection.

Gierke's participation in this game, pitting US graduating high school seniors against the French team, is doubly historic in that it marks the first time a scholastic team from the United States will compete on French soil and it is also the first time a scholastic US team has traveled overseas to play another country's national team that has previously qualified for the World Championships of American Football.

France, the European U19 champion, finished sixth at the U19 World Championships of American Football in Austin, Texas in July last summer.

American Football Worldwide's ELITE team comes from a true cross-section of the United States and represents nearly every corner and region of the country.

Fourteen different states are represented on the 35-man roster. Players hail from coast-to-coast including New York to California, Ohio to Washington, Texas to Minnesota and with states in between including Oklahoma, Kentucky and Tennessee.

Intermixed with the educational value of the trip, the team will refine football skills, work to find common ground in terminology and schemes, as well as coordinate timing in an effort to put together a formidable game plan for the French hosts.

"Meeting one another for the first time and installing an effective and well-coordinated game plan in all phases of football in less than a week will be a formidable challenge," Elite team coach Jim Barnes said. "However, from the research we have done, conversations we have had and film we have viewed, we are excited about the potential for this team.

"It is clear the young men are capable and I believe that through all the educational touring the 'football focus' will be there. I expect us to work hard and compete with every fiber we have in an effort to earn a victory."

Barnes has spent 16 seasons as a football coach at the NCAA Division III level, which is where Gierke will play next year.

The Greencastle senior recently committed to play for the Wabash College Little Giants in the fall.

AFW Elite team members will meet either in Chicago on Saturday, March 23 or in Paris on the morning of Sunday, March 24.

During the next week, the players, who will be joined by some family members and fans, will tour many of the historical icons of France including the impressive sites of Paris, Versailles and the Normandy coast.

Two days prior to kick-off the players will tour the D-day beaches, US Cemetery and Peace Memorial on the bluffs overlooking the English Channel.

Barnes is looking forward to the tour.

"Observing these young men grow from the unique education that only international travel can offer will once again be a remarkable thrill," he said. "They will all have different reactions through their previous upbringing and experiences, but I know this will be tremendously rewarding and life-expanding for them.

"What an incomparable emotion these young men will have running out wearing the red, white and blue on Saturday March 30."

For more information on American Football Worldwide and this venture contact Jim Barnes at jb@americanfootballworldwide.com, or visit AmericanFootballWorldwide.com.