Snowman gives teacher a warm welcome on a cold morning 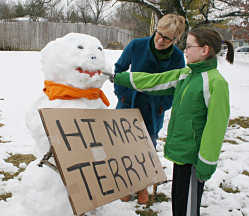 Showing off her handiwork during recess Thursday afternoon, nine-year-old Zoe Weltz tells teacher Kathy Terry about some of the materials she and her family used to make a snowman across from Tzouanakis Intermediate School. The "Hi, Mrs. Terry!" sign in the snowman's arms was a pleasant surprise to the fourth-grade teacher as she got to school Thursday morning.

Kathy Terry drove to work Thursday morning enjoying the scenery the recent snowfall had left behind.

The fourth-grade teacher pulled onto Linwood Drive, enjoying the way the snow looked on the treeline behind Tzouanakis Intermediate School.

Glancing back to her left, she noticed a snowman next to the street. Thinking it was a cute greeting after a day off school for snow, she nearly missed sign resting in the snowman's arms.

And then she stopped, backed up and took in what Frosty had to say. There, in magic marker on cardboard was the simple message: "HI MRS. TERRY!"

A day otherwise marked by the tedium of ISTEP+ testing had just become Teacher Appreciation Day.

"It's a great way to start at day," Terry said. "I'm not going to lie, I got a little emotional about it."

The teacher snapped a quick picture of her newfound, snowy friend before continuing into the building.

Once she arrived in her class, she learned of the snowman's creator, nine-year-old student Zoe Weltz and her family.

For the Weltzes, who live just in front of the school on Ritter Avenue, the snowman was a fun diversion when school was out for a snow day on Wednesday. After a bit of sledding nearby, the family decided to give students and teachers a greeting as they returned to school.

"We thought it would be fun to build a snowman for people to see on their way to school," Zoe said. "Then we decided to give it a sign that said, 'Hi, Mrs. Terry!'"

Zoe, along with seven-year-old brother Harris and parents Scott and Annie, added a few touches besides the sign. Golf balls make the eyes and nose, the mouth is treats borrowed from the neighbor's dog. His scarf is an old T-shirt.

With overcast skies and temperatures slightly above freezing, the snowman was still greeting passersby when parents arrived to pick up their children in the afternoon. 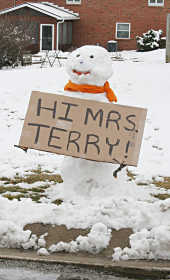 He likely isn't so fortunate today, with mostly sunny skies and a high of 43 predicted.

Here's hoping Thursday's recess was a chance to run and have some fun before he melted away.