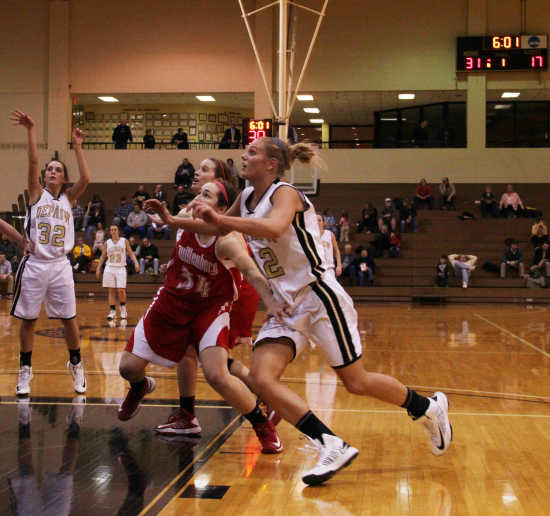 An opponent from Wittenberg tries -- and fails -- to box out DePauw senior Ellie Pearson (22) in a game earlier this year. Keeping the active and ambitious Pearson off the glass is easier said than done. (Banner Graphic/GRANT WIEMAN)

DePauw senior Kate Walker is a phenomenal player, and a phenomenal rebounder, especially for a guard. She wants to rebound and she can anticipate perfectly where ball is coming down.

The problem is that, most of the time, when she scoots into place, Ellie Pearson is either already there or on her way.

Pearson flies over top and snatches it from Walker, her opposition and anything else that stands in her way, blind to everything but the ball.

"At first it was frustrating when she'd knock me down to get the rebound," said Walker, a teammate of Pearson for the last four years. "I've gotten used to it."

DePauw has won its first two NCAA tournament games by a combined 57 points. Probably more impressive, if you care about things besides the scoreboard, is the combined 44-rebound advantage.

The Tigers (30-0) have always focused on the glass, but the last two games have been outrageous. Against second-round opponent Maryville, DePauw won the battle on the glass 42-20 (That's good; trust me, I was a math minor).

Leading the way is Pearson, who has put together the best streak in DePauw's history.

Pearson had 15 boards in the North Coast Athletic Conference tournament final, then decided to get serious about hitting the glass.

She set a career-high with 19 in the NCAA opening round game against La Roche, then hauled in 18 more against Maryville.

The previous record-holder, Emily Marshall, had 35 in the 2007 tournament, but that took six games.

Pearson is a great rebounder, and has been since she first suited up for the Tigers, but this run is ridiculous.

"I had I think 18 rebounds in a game my sophomore year out in a tournament in California, but I've never had back-to-back nights," she said.

Pearson played 38 minutes that November night in 2009, the most of her life. It's not clear why she played that much, since it was a 15-point win (over La Verne, if you're interested) and it was the beginning of the year, but that was a pretty good game.

She got limited minutes this year, entirely because DePauw was smashing all its opponents, but she averaged 10.6 rebounds per AMT (Arbitrary Minute Total, 29.5 minutes per game, in this case) during the regular season.

In 59 minutes this NCAA tournament, she's averaging 18.5 per AMT.

Where did this come from?

She'll tell you it's about her teammates being consistent shooters, and how that makes it easy to read the caroms. That's not wrong, but it's not right.

"Ellie is one of the most tenacious players that I've ever played with," senior Kate Walker said. "If there's a ball flying around, it's guaranteed that Ellie is going to get it about 90 percent of the time. She gives herself a lot less credit than what (she deserves)."

Then Pearson will tell you she's been trying extra hard to make up for the loss of starting center Alex Gasaway.

"She's kind of hurting that her buddy wasn't out there," DPU head coach Kris Huffman said.

That's probably mostly true, but Gasaway returned from a knee injury last game and Alison Stephens, who started in Gasaway's place, got 10 rebounds herself.

Gasaway is no slouch on the glass (6.5 per game this year) and missing her is a real thing, but if all Pearson did was get Gasaway's boards it still wouldn't explain what's happening.

The whole truth is that Pearson is a senior, and she doesn't want to lose.

She's an excellent passer -- from the high post and off the dribble -- and at 5-11 she's athletic enough to guard every position on the court. Pearson has spent her career as the ultimate role player.

Always surrounded by teammates who are scoring threats, Pearson has taken to mastering the little things and thrived because of it.

Since the tournament started, she's turned up her focus, played with poise and been a vocal leader on and off the court. Everything is coming together for her.

She's now just 37 rebounds from tying Marshall for the single-season school record. She's 41 from Marshall's career record. Pearson will say none of that matters, and with that she is telling the truth.

The only thing that matters now is winning.

"I think I am just trying to be more active and trying to move more," Pearson said. "I want to win so I'm going to do anything I can to do that. If that's being more active on the glass then that's great."

Pearson isn't used to being the star.