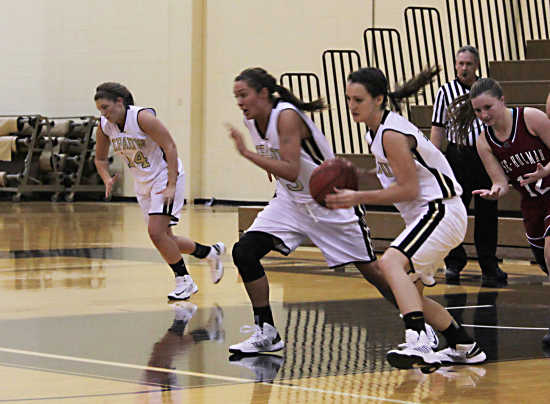 Senior Kathleen Molloy leads the Tigers' bench group on a fastbreak. Molloy embraced her sixth-man role this season, give the DPU team a depth advantage over any team it faces. (Banner Graphic/GRANT WIEMAN)

When the DePauw University women's basketball team tips off against Washington University-St. Louis on Friday, it will be new territory for the players.

The host Tigers have been one of the most successful teams in the country for the past decade, including a 2007 national championship, but this particular group of seniors, with 108 wins in the last four years, has yet to reach the third round of the NCAA tournament.

That'll change at 7 p.m., and for the team to go forward they'll have to beat the five-time national champions.

"Wash. U is one of our rivals," senior Kat Molloy said. "They always have been."

The Tigers are 5-18 all time against the Bears, but DPU has won the last two games and four of six, including a Nov. 24 showdown in the fourth game of the season.

"If you look at the history of their program, I guess you'd call it a dynasty," DPU coach Kris Huffman said. "They just reload every year. They get great athletes with high expectations. And then you have the best coach in the nation coaching them up."

Nancy Fahey, in her 27th season at Washington U, has led her team to nine of the last 20 NCAA title games, and four times since 2007.

That year the Tigers beat the Bears for the national title. The teams met again in the tournament in 2008, another DePauw win.

The teams began scheduling early-season showdowns soon after that, playing in preseason tournaments against one another to measure themselves.

"They're one of the best teams we'll have faced all season long," Huffman said. "They're outstanding. They've got great size, great depth. Their transition game on offense is very, very good. They have an inside game and an outside game. They move the ball so well ..."

Huffman and the team has great respect for its Friday opponent.

DPU won the early game 60-59, rallying late to do so. Junior Alex Gasaway's steal on the final possession prevented a game-winning attempt, but the Tigers are a different team now.

They've gained confidence and experience throughout the season.

In that game DePauw's most talented scorer, sophomore Savannah Trees, was making just her fourth career start. She scored 17.

Molloy, a starter last season, was moved to a sixth-man role this year. She's embraced the challenge, and the Tigers have thrived with their added depth.

"As an athlete, you're really competitive so you never want to take a step back, but it gives me something to always work for," Molloy said. "Obviously you want to be starting, but Savannah is a really good player and she's been doing really well. I'm just doing what I can when I get in there."

Molloy can be a tenacious defender, and despite moving to the bench, her minutes haven't gone down and she has passed or approached career-highs in every statistical category.

Like all of the Tigers, Molloy thinks of the team first. That's part of the reason they've been so dominant this year.

The nation's No. 5 team, Montclair State (29-0), has won its two NCAA games by 60 combined points. The Red Hawks will have their hands full when they face Christopher Newport University.

The young CNU captains (28-2) hosted their opening weekend games and are bringing a 15-game win streak to DPU.

It'll be a challenging weekend for DePauw, a new experience for a team that has only played two single-digit games this year.

"At this stage there are no easy ones," Huffman said. "I think everyone just has to step up a little bit. We talked just make one more shot that you take, and get one more rebound and box out a little bit better."

The Tigers will be ready to do whatever it takes.

While tonight likely won't be the same blowout win they've gotten used to, Molloy said the team will take what it can get.

"It would be nice to win by more," she said. "You want to survive. If you lose, you're done, and we're looking to win."