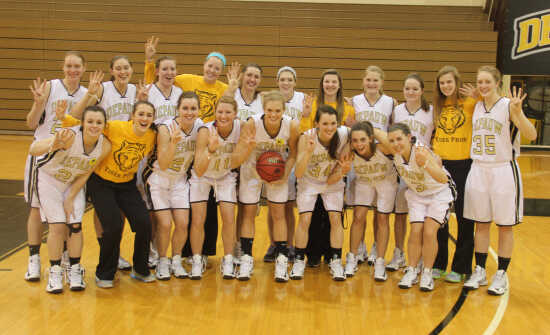 The DePauw women's basketball team is going back to the Final Four.

Undefeated DPU (32-0) earned the trip this weekend with a sizeable win over Christopher Newport University on Saturday, 76-55.

Ranked No. 1 for the duration of the regular season, the Tigers will now advance to the third Final Four in the school's history.

"This is something I've worked for since I first touched the ball in third grade," DPU senior Kate Walker said. "This is what you dream of, and nothing is going to match it. And to do it with these girls next to me is an amazing thing.

"To have my best friends be the people that I'm going in it with -- it's really exciting." 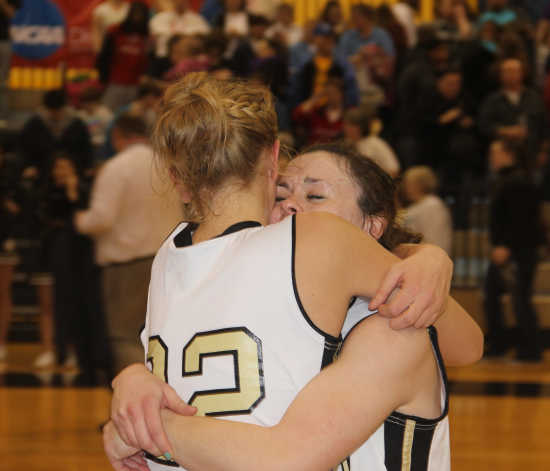 While the game was deceptively close, the final outcome was almost never in doubt.

As the clock began to tick down, DPU head coach Kris Huffman sensed the victory was at hand and removed her seniors -- Walker, Ellie Pearson and Kathleen Molloy -- one at a time, allowing them to savor the applause in their final collegiate game at Neal Fieldhouse.

"We've been working hard to get to this point," Molloy said. "It's just exhilarating." 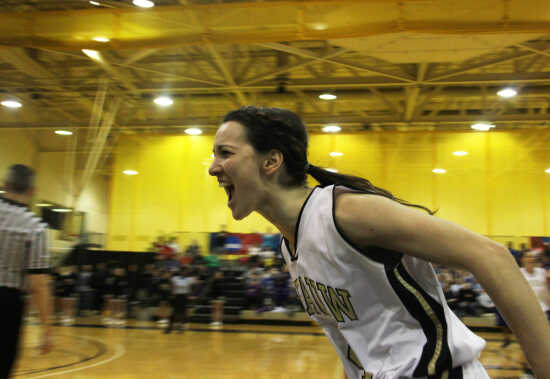 Senior Kat Molloy checks out of her final game at Neal Fieldhouse.
Order this photo

It's been a long quest for the team this season. When the primary goal of most squads stops at winning a conference championship or making the NCAA tournament, the Tigers have had their sights set on the Final Four all year long.

Earning the right to host the Final-Four clinching game made the night just that much sweeter, Huffman said, particularly for the seniors.

"These three have meant so much to me," she said. "I want the world for them, now and in their futures. I know how hard they've worked; the time they've put in; probably the tears that they've had during a career. I have never wanted it more for a group than I wanted it for these three." 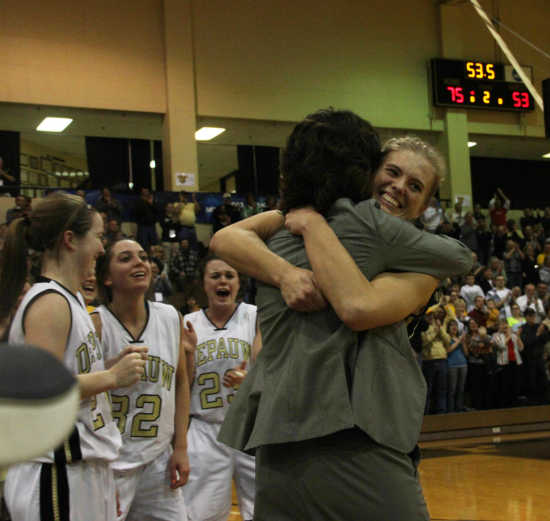 The Tigers started Saturday's Elite Eight game slowly, as they're wont to do, but, as they have all year, their depth of talent and versatility wore out the Captains.

CNU (29-3) opened each half with energy and a scoring spurt (4-0 in the first, 4-2 in the second), but DPU simply did not allow the visitors to got on a prolonged run.

"We lost to a really good team today," CNU coach Bill Broderick said. "It's the first time where we've really seen a top-five program and kind of the speed and the intensity that they played with, and I think we weren't able to match them for 40 minutes."

For the second straight night -- and a rarity this year -- the Tigers faced a size disadvantage. But while CNU tried to use its bulk and height to shoot over DPU, the Tigers were content to scoot around them.

Pearson thrived in the environment and scored a career-high 21 points, tying DPU sophomore Savannah Trees for the most in the game.

"Our offense is set up so that anybody can score in so many different ways," Pearson said. "I went out with an aggressive mentality." 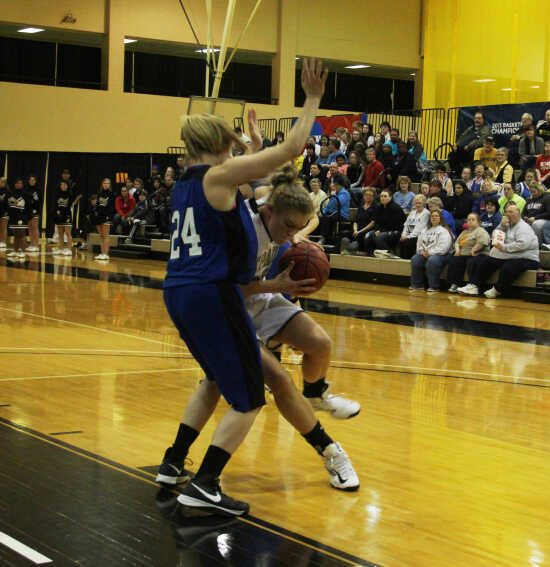 Ellie Pearson had an "aggressive mentality" en route to her career-high 21-point performance in the Elite Eight on Saturday.
Order this photo

"(Pearson) had a couple put-backs and a couple drives to the left that got her going," Huffman said. "Late in the game, when we came out of a timeout and we were looking for what we were going to run offensively, Ellie said, 'How 'bout Power Hold.' And it was a perfect call. I think it was an and-one on that play.

"It was a perfect call and she was feeling it. You like it when a player has that confidence and the gaps look bigger, the basket looks bigger, and that's the kind of night Ellie had tonight."

Throughout the season, DPU has pulled away from its opposition in the opening stretch of the second half.

CNU prevented that Saturday, earning a moral victory. The Tigers took a 38-25 lead into the break, but CNU held strong and trailed just 45-35 at the 15 minute mark.

From there, though, the Tigers' depth became too much for the Captains to contain.

DePauw worked 10 players into the game throughout the contest, losing little or no talent level with substitutions, and wearing down CNU. 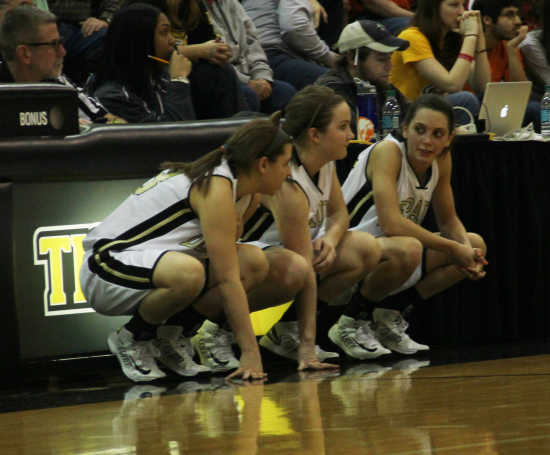 DPU guards (from left) Emma Ondik, Savannah Trees and Ali Ross check into the game during the first half.
Order this photo

The Tigers' leading scorer for the season, junior Alex Gasaway, had 12 points and four rebounds off the bench.

DPU will now focus its attention on the Williams Ephs (26-5), the team's national semifinal opponent.

The Division III Final Four is hosted by Hope College in Holland, Mich., and it will be the second trip to the school for DPU in three years.

"This is a day that we hoped we could get to," Huffman said.

The 2011 team lost at Hope in the second round of the NCAA tournament.

Before they get there, the players are pausing to try to led the victory soak in.

"I was in bed last night and I was thinking to myself, 'Even just to be in the Elite Eight ...' I was ecstatic," Walker said. "I had to calm myself down to even be able to fall asleep.

"Going to bed is going to be difficult." 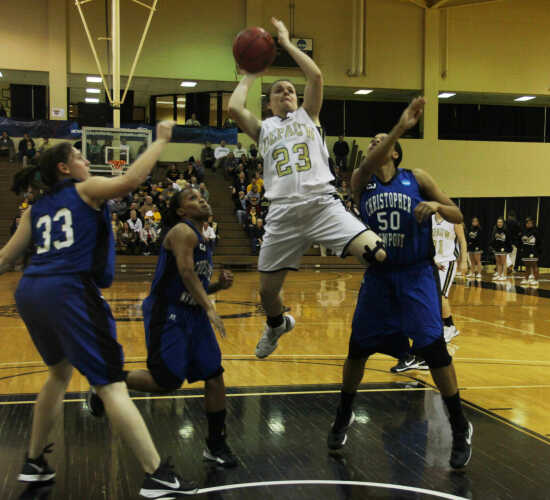 Kate Walker slices through three defenders to get to the basket.
Order this photo