Born the fourth daughter of Charles and Edna (Myers) Jones in a family of eight in the tiny coal mining community of Cardonia north of Brazil, the early years were set in the Depression filled with country chores and cooking and outdoor fun.

"We didn't know we were poor," she would proudly state. 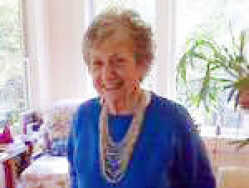 She graduated from Van Buren High School and waited for her sweetheart Wayne Schepper to come home from World War II. They were married in 1947.

They enjoyed a happy 61-year marriage before his death in 2007, living their life on quiet Alabama Street where they raised two children, Brenda and Gary.

Over time she became "Nanny" to 10 grandchildren and nine great-grandchildren. Beloved by all, she read to them each day never skipping pages. She brought energy, laughter and tap dancing to make a visit merry.

From her kitchen we could count on a special red velvet cake to share. Known for her high energy, her sense of humor, and her kind nature she was extremely physically fit for her whole life and could keep up with her grandchildren even in later years. She loved to feed her family Sunday dinner and was an especially good cook.

She belonged to the Brazil congregation of Jehovah's Witnesses and held firm to her deep religious beliefs. She was a homemaker and later worked as the hostess for many years at Adami's Restaurant in Brazil.

She was preceded in death by her parents; her husband Wayne; sisters Charlotte Hoffman, Beatrice Zimmerman and Mary Belle Harrison; and grandson Ryan Whitesell.

She is survived by her brother, Dale Jones (Joann), and sister Sally Bucklin (JIm), both of Brazil; sister Marguerite Raybould of Tampa, Fla., and sister Kay Hobson (Larry) of Monrovia.

She is also survived by her daughter, Brenda Whitesell (Ken) of Brazil, and son Gary Schepper (Ann) of Bloomington, 10 grandchildren, nine great-grandchildren and many nieces and nephews.

She was able to enjoy some time living with her Bloomington family Gary, Ann and Chris in after her husband died.

In her last years she lived cheerfully at Asbury Towers Retirement Community in Greencastle. The family would like to thank the kind and capable staff there for the love and care they gave in her last years.

The family would also like to thank her niece, Susan Tuenge of McCaysville, Ga., and Susan's husband Gordon and their family for the love and kindness, and generosity shown to their Aunt Thelma.

In lieu of flowers please consider a donation to the Brazil Public Library or your local library in honor of her love of reading to children.