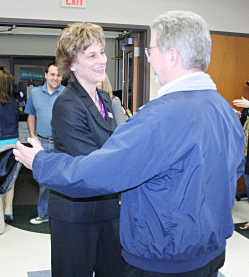 The Greencastle School Board did exactly what it was expected to do Monday afternoon, much to the delight of the gathered staff and community members.

Following a temporary appointment as acting superintendent, Dawn Puckett was officially named the full-time superintendent, to a standing ovation from those in attendance.

A momentarily overwhelmed Puckett expressed her appreciation to the board and the school employees "who've weathered a storm with perseverance. It means a lot to me that you've been there and we've been there together."

Three months after a tense meeting that packed the Ridpath Primary School cafeteria with community members calling for changes, Monday's meeting was a much more light-hearted affair.

Citizens, employees and board members chatted and laughed before the meeting. One staffer was overheard saying, "I'm glad this day has finally come."

Even when board president Mike Dean called the meeting to order, some of the light spirit of the afternoon continued.

With the right wording in place, board member Denise Sigworth made consecutive motions to remove the acting title and appoint Puckett as superintendent. Tobin seconded both motions.

Amidst the genial atmosphere, the seriousness of Puckett's promotion was lost on no one, particularly the administrator who has spent her career serving Greencastle Community Schools.

Comparing some meetings in the last year to "old-fashioned revivals," Puckett spoke of the enthusiasm the community has shown for education.

"What has struck me the most is the passion that exists for education in the Greencastle Community," Puckett said, adding that community members have repeatedly stopped her to give words of support since her appointment.

As another mark of an improving climate at the schools, Puckett said large pools of candidates had applied for Greencastle's open high school assistant principal and athletic director positions.

"Working and teaching at Greencastle Community Schools is back in fashion again," Puckett said.

Board members reciprocated the praise Puckett sent their way.

"The hiring of a superintendent is the most important job a school board has, and it's amazing how easy this was," White said.

When the board called for comments from the audience, only one was offered -- a hearty "You go, girl" from the back of the room.

Puckett's appointment officially marks the end of Lori Richmond's tenure. The former superintendent has been on a leave of absence since mid-December.

After granting Richmond the leave of absence, the board later authorized Dean and corporation attorney Bob Rund to negotiate a separation agreement with Richmond and her attorney.

Once the agreement was reached in principle, it was circulated among board members, all of whom signed it.

Following Richmond's signing of the agreement and a legally mandated revocation period, her resignation was official, clearing the path for Monday's appointment.

With a new era beginning, Puckett pledged her tireless effort in service of the school and community.

"I will work every day with integrity, fervor and honesty," Puckett said. "Every decision we make will be shaped by what is best for the school. Thank you, and remember it's never a bad day to be a Greencastle Tiger Cub."