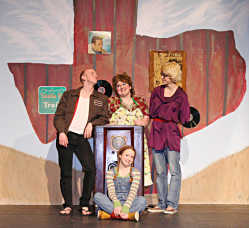 The Bumiller family gathers around the radio, the major source of news and entertainment in the small town of Tuna, in the Greencastle High School production of "Greater Tuna." Portraying the Bumillers are (clockwise from the left) Alex Asbell as Stanley, Reba Chapple as Bertha, Alex Briones as Charlene and Libby Brush as Jody. Not pictured is Mike Waddell as Hank.

What could be more fun than an evening spent with a bevy of eccentric characters with names like Bertha Bumiller, Thurston Wheelis, Vera Carp and Petey Fisk?

These are the inhabitants of Tuna, Texas, in Greencastle High School's production of "Greater Tuna," set to take the stage this weekend (Friday and Saturday at 7:30 p.m. in Parker Auditorium).

Originally produced in 1981 with playwrights Jaston Williams and Joe Sears playing all 20 roles themselves, "Greater Tuna" has become a cult classic in the theatrical world. It was so popular among theatergoers in Texas that the playwrights went on to create three "sequel" scripts: "A Tuna Christmas" (1989), "Red, White and Tuna" (1997) and "Tuna Does Vegas" (2008).

Welcome to Tuna, the third smallest town in Texas!

All tickets are $5 and may be purchased at the door.