Ag Day in Putnam County is Saturday, March 16, and the statewide and nationwide celebration is set for Tuesday, March 19.

However, it is a month-long event, with Governor Mike Pence having declared March as Agriculture Appreciation Month in Indiana, an extension of National Ag Day on March 19. 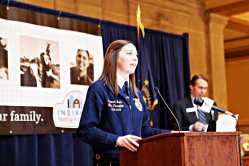 A Putnam County resident was front and center for the recent Agriculture Appreciation Month festivities at the statehouse. Cloverdale resident at Indiana FFA State President Cameron Mann read the official governor's proclamation at the March 5 event.

Lt. Governor Sue Ellspermann kicked off the celebration at the Statehouse last week. The event served up exciting opportunities for state lawmakers and the public to engage with farmers and members of the agriculture community.

It signaled the beginning of a month-long celebration to learn more about how Indiana's 62,000 farm families nourish families, animals and soil.

Indiana's Family of Farmers, a coalition of more than a dozen ag-related organizations, hosted the event.

"The Governor and I look forward to working with Hoosier farm families as they provide safe, quality and nutritious food for our state, our country and our world," Ellspermann said. "The agriculture industry is a major provider of jobs and economic growth throughout our state. Our farmers are also nature's caregivers as they work innovatively and proactively to protect our state's land and water resources."

Outside on Senate Avenue, 10 food trucks served to a crowd undaunted by rain. Several were sold out well before the event ended and were featured regularly at the 2012 Statehouse Market, a State Personnel Department wellness initiative.

Indiana FFA members from the Star Academy also interacted with the public and Flyte the Owl, the official mascot of the National FFA Organization, entertained the crowd.