How big is agriculture in Putnam County? 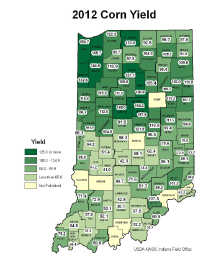 One of the books that many kids like to read is titled "How Big is A Million" and discusses a little penguin's search to find a something that numbers this quantity. Many of the numbers associated with agricultural statistics are in the millions and may be a little hard to grasp.

For example, the state of Indiana has 23 million acres. How big is an acre? An acre is 43,560 square feet, which does not help most visualize the size of the state. An acre might better be visualized if one considers a college football field which is 57,600 square feet or 1.3 acres.

Of Indiana's land area, more than one half (nearly 14 million acres) is used for annually planted crops most, of which are corn and soybeans. About 4.5 million acres is timberland, and 4.5 million is homes, yards, non-ag business, factories and highways.

During the 1920s and '30s, individuals in the US produced roughly 20 percent of their food at home. Contrasted to the recent 20 years, only two percent or less of food was produced at home.

As a nation, residents are blessed to have the most inexpensive food in the world. Of the US consumer income, only 9.6 percent of expenditures is directed toward food. Compare that figure with China at 32 percent, the Philippines at 38 percent, Jordan at 43 percetn and Pakistan at 50 percent!

An emerging trend is the more than 40 percent increase in US government expenditure starting in 2009 as a source for food expenditures. Since 2000, food cost as a percent of disposable income has been just below 10 percent and since 1925 when data was first collected has never been more than 25 percent.

The US has the most abundant and available food supply anywhere and at the lowest cost thanks to the efficiency of farms like those here in Putnam County.

How does Putnam County compare to the other 92 counties in the state in terms of agriculture production? 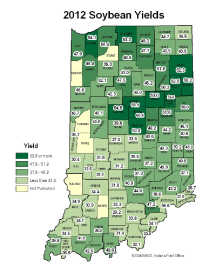 In an emerging trend as livestock numbers drop and grain prices strengthen, Putnam County hay land has dropped roughly 50 percent in the recent year of reports while improving five notches on the state ranking of counties showing the trend is statewide. For the first time, alfalfa hay was not reportable being an insignificant number.

As most remember the historic record drought of 2012, yields especially for corn, departed from the trend line the greatest percent ever recorded. Preliminary 2012 data are available and a statewide county yield map is available while total production data is not available. Using the maps, it appears Putnam County ranked a horrid 75th place in soybean yield, being tied with Monroe County at 31.8 bushels per acre. Corn yields averaged a very dismal at 61.4 bushels per acre average, but fared better in state ranking for yield at 67th place using the preliminary numbers on the map.

Agricultural land is not just "undeveloped land" as some individuals refer this vast land area. Using the latest data from 2010, Putnam County generated $65.1 million dollars in crop receipts and $20.9 million in livestock receipts for the local economy. This total of $86 million in agricultural receipts resulted in $18.6 million of net income to the county after expenses. Now that is a boost to the local economy!

Take time during the month of March to thank a farmer for their work and efforts that result in local residents having such a safe, abundant and inexpensive selection of food. A good chance to celebrate agriculture and thank farmers will occur during the Ag Day events from 8 a.m.-noon on March 16 at the Putnam County Fairgrounds. Hope to see you there.