No. 1 DPU pushed to brink but Tigers survive, move to NCAA Final 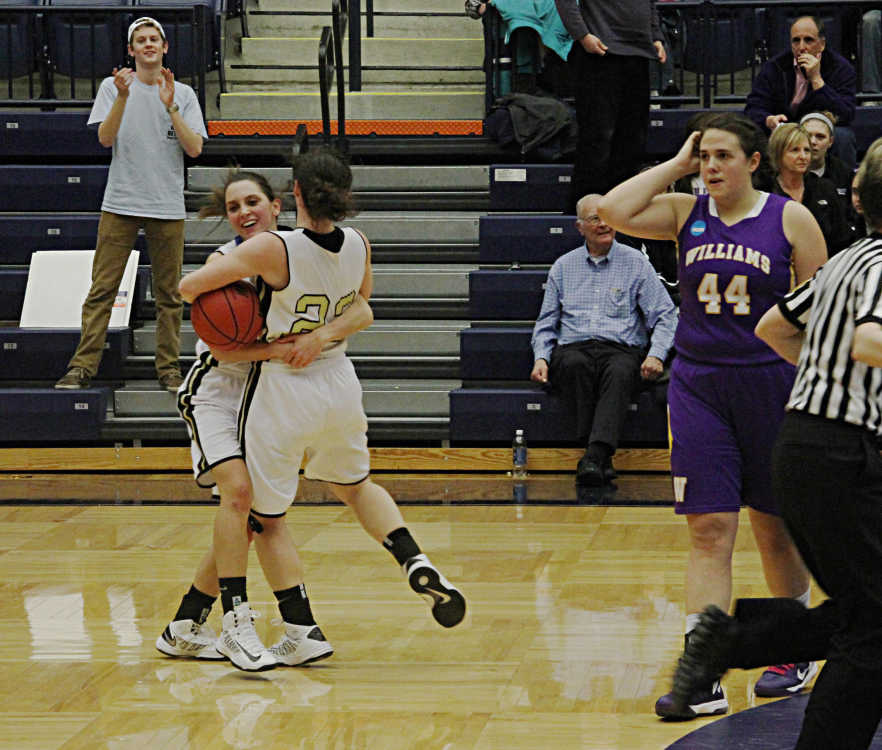 With a shot at a national championship just a day away, DePauw guards Ali Ross (left) and Kate Walker celebrate the Tigers' 59-56 win over Williams, as the Ephs' Grace Wehnquist scratches her head at the close loss. DePauw (33-0) tied the NCAA Divsion III womens' record for victories in a season with the win. They will go for the record outright and, more importantly, their second national title in a 7 p.m. matchup with Wisconsin-Whitewater at 7 p.m. Saturday.
Order this photo

HOLLAND, Mich. -- DePauw is not yet ready to be finished. The Tigers got pushed to their absolute limit on Friday in the NCAA Final Four semifinal, but they survived with a 59-56 win over Williams College.

The undefeated, top-ranked team in the country trailed by one point at halftime, but, led by senior Ellie Pearson and sophomore Savannah Trees, the Tigers emerged from the break with intimidating defense and aggressive offense, seizing control and a trip to the national championship game.

"We survived. It feels like we just survived," DPU coach Kris Huffman said. "I'm really proud of how they've stepped up."

The Tigers trailed by eight with 2:54 remaining in the first half, their biggest deficit of the season, when Huffman pulled senior point guard Kate Walker, moving Trees to the one.

She responded with a pair of steals to spark an 8-0 run.

"Kate expends a lot of energy and we needed to get her a break," Huffman said. "I liked Savannah's size a little bit more than Emma (Ondik's) size at that point. Savannah has so many ways she can score the basketball."

After a Williams three, Walker re-entered the game with 22 seconds left and banked in a layup to move the score to 28-27 at the break.

While the team started the game with a nervous energy, they emerged from the break using that emotion to their advantage.

"When you start running up and down the court, that goes away. You can literally look in your teammates' eyes, and those nerves go away," Ali Ross said. "I think it's a good kind of nervous."

In one key stretch in the second half, Ross, listed at 5'7" but probably a couple inches shorter, was forced into guarding Williams' Claire Baecher, who is every bit of 6'3". 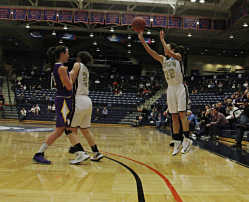 Fresh off an assist and screen from teammate Kate Walker, DePauw junior Ali Ross knocks down a second-half three-pointer. The bucket was part of a 14-5 run that saw Ross hit a pair of treys and the Tigers take control of the game.
Order this photo

Ross was backed down into the post but held her ground and got a stop. She then calmly ran to the corner on offense and knocked down a three-pointer.

"When I got switched onto her, it was a tough position to be in," Ross said. "It was a great feeling. It's so much fun when your teammates are around you and so excited with you. It was an unbelievable moment."

Ross nailed another three, then sophomore Emma Ondik stepped up and hit one from the wing.

The rally was part of a 14-5 run that lifted DePauw to the win and a trip to the NCAA championship game.

DePauw had only five turnovers and allowed Williams to attempt only two free throws.

"This is such a competitive team and we don't want to lose," Pearson said. "At the end of the day, we're playing basketball, which we love to do. It's a blast out there, the venue is great and the competition is incredible."

The Tigers advance to take on Wisconsin-Whitewater in Saturday's final at DeVos Fieldhouse at 7 p.m.