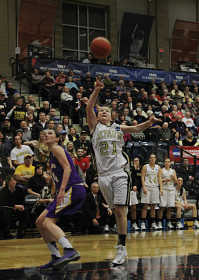 A scorer with a knack for acrobatic shots, DePauw sophomore Savannah Trees gave the Tigers 14 key points in their national semifinal win over Williams.
Order this photo

She's DPU's best scorer, but she's not usually the one making big, game-changing plays. Trees flipped the script on Friday.

DPU trailed by eight late in the first half when Trees took over at point guard. Her defense got DPU back into the game and left them down one at the break.

With the game in the balance in the second half, Trees stepped up again. She finished with four steals and 14 points, but each play was key.

Trees was gun-shy to start the game -- understandable for a sophomore starting in the national semifinal. Then she flipped the switch.

"It feels good that they have faith in me to play the different position, because I definitely need confidence out there," Trees said. "I was just trying to be energetic on defense to fuel everyone's offense. Usually steals get us really pumped up and lead to layups and fast breaks."

She became the answer to Williams' imposingly tall frontcourt.

Instead of driving all the way to the basket and getting swatted, she pulled up from 15 feet; pump-faked; drew a foul.

Trees is an unbelievable scorer with a sometimes magical ability to make the ball drop through the hoop at whatever angle she chooses. 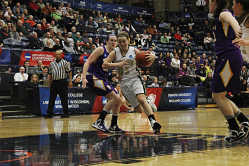 The question for her is not if she will be able to score, it's if she'll decide to score.

It's amazing that someone as capable as her would have a career-high of only 21 points, and she just did that in the Elite Eight.

DePauw spreads the ball around and each player gets her share. Junior Ali Ross hit a couple big threes. Senior Ellie Pearson had 15 points, and nobody wants to win more than her. But Friday, when DPU needed buckets, it turned to Trees.

It's an egoless group, and a talented group and that's why they're in the championship game.

When the team's best scorer buys into that mentality as well, magic things can happen.

On Friday she proved, no matter how big the moment, it won't be pressure (or defense) that stops her. It will all be her choice.