Tigers prove it: They are unbeatable

The DePauw women's basketball team is perfect. Every opponent the Tigers faced this season knew they were outmatched. The Tigers won the NCAA Division III national championship on Saturday with a 69-51 win over the University of Wisconsin-Whitewater, and like every game the Tigers played this year, it wasn't that close.

DePauw jumped out to 33-0 record this season, then a 23-4 lead in the game. UW-Whitewater has a stretch of more than three minutes where it didn't attempt a shot. 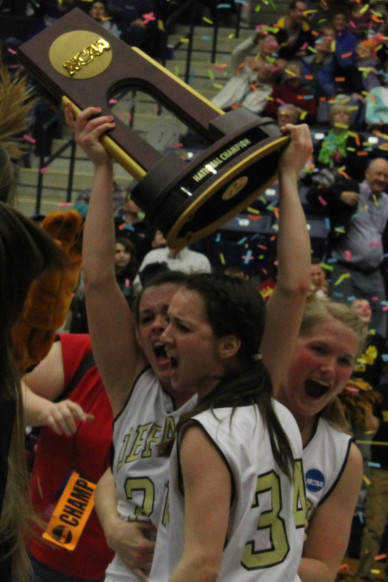 "It's unbelievable," DPU junior Ali Ross said. "I think we had a lot of confidence. We knew they were a good team. It's the national title game and everyone is going to leave their heart out on the floor. We had confidence, and I think that's what made us excel."

DePauw senior Ellie Pearson was named tournament MVP and, like everything the Tigers did this year, that decision was never in doubt.

"I have great teammates and I have a great coach," Pearson said. "My head has been on straight this past few weeks and I've played with a tremendous confidence, which stems from the team chemistry and the team coaching staff. I'm just so happy."

For DPU, the game was a culmination of the punishment they've unleashed on opponents all year.

The Tigers shot 61.2 percent on Saturday, and UW-Whitewater shot 42.6 percent.

"We are pleased to be sitting here -- as national champions," DePauw coach Kris Huffman said. "I could not be more proud of this team. We pushed them hard from day one, and they pushed themselves the rest of the way. They're a team that has a lot of fight in them. They have a motor that keeps running. The way we started that game tonight -- life was good."

Huffman's crew wrapped up an unbelievable season Saturday. The team's only goal this year was a national championship. Nothing else mattered and nothing else was acceptable.

Senior Kate Walker scored 17 points and was named to the all-tournament team. Walker and the team's other seniors won their 112th career game on Saturday, the most in school history. The team's 34 wins this year set an NCAA record.

"Each loss that happened freshman year was a stab to the heart," Walker said. "As well as sophomore year; and junior year -- losing to Carthage and not getting past the first weekend -- so much so that Ellie and Kat and I talked about it and said, 'No. Never again. It's not going to happen.'

"We'd work and we'd work hard and we'd work together. Doing that with them; it's unreal. Seeing it actually come together -- the 34-0 season and national champions -- there's no better way to end your senior year. I'm just so proud of my team."

The seniors never got stabbed in the heart more than four times in a season.

Walker made two-of-three three-pointers in the game and finished the season making 57.1 percent from behind the arc.

"I came here as a freshman as a piece of work that coach Huffman had to mold into something," Walker said. "Each year I tried to improved and get better for the team."

DePauw took Walker's lead this year, and she led them to a championship. Pearson was the star. Everyone contributed.

As the clock started to tick away -- five minutes, then three, then two -- the victory became more and more sure.

"Once it breaks two minutes, you can start to watch the clock go down and start to get goose bumps," Pearson said.

Huffman waited to pull her starters, remembering how UW-Whitewater got to the championship game. Junior Mary Merg hit buzzers-beaters at the end of regulation and overtime to get the win, coming back from 12 down with 3:02 left.

"We didn't want to start any celebration too soon," Huffman said. "It wasn't until that minute showed up on the clock that I was ready to substitute and think about giving some hugs."

With 45 seconds remaining, Huffman pulled her three seniors -- Pearson, Walker and Kat Molloy -- and let them hear the roar of the crowd.

"It was nice to have the crowd recognize them," Huffman said. "What a year they've had. I give them so much credit for the personality of this team. ... All three of them were outstanding, and I'm so happy for them."

(From left) Ann Sarkisian, Jenna Stoner, Lauren Abendroth, Emma Ondik, Kat Molloy, Kate Walker, Ali Ross and Savannah Trees celebrate the win (Banner Graphic/GRANT WIEMAN).
Order this photo
Comments
View 1 comment
Note: The nature of the Internet makes it impractical for our staff to review every comment. Please note that those who post comments on this website may do so using a screen name, which may or may not reflect a website user's actual name. Readers should be careful not to assign comments to real people who may have names similar to screen names. Refrain from obscenity in your comments, and to keep discussions civil, don't say anything in a way your grandmother would be ashamed to read.
Respond to this story