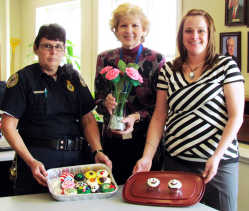 The event was sponsored by the Promoting Positive Correctional Culture (PPCC) committee and featured 15 varieties of cupcakes.

"It's a difficult job, but somebody has to do it," Crabb remarked as he took another bite.

"It was good to see the creative side of co-workers," Lewis said, "I look forward to other events that will display their versatility."

After the judging, the casualties of war (cupcakes) were a sweet diversion for staff as participants sold their savory concoctions raising $95.65 for the American Heart Association.

"Everyone had a good time and the cupcakes were delicious," Bennett said. "But more importantly, we were able to assist the American Heart Association in its efforts to reduce deaths caused by heart disease and stroke. Thank you to everyone who participated."

PPCC is a facility-based program comprised of correctional employees who sponsor events that promote a positive cultural environment for the PCF staff and offenders.