Flummerfelt back at DPU for Sunday choir performance 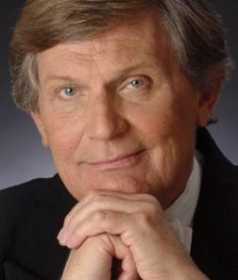 It is Wednesday afternoon -- the regular weekly rehearsal time for the DePauw University Choir. Today, however, the choir is joined by the DePauw Chamber Sing-ers, and together they are rehearsing the tricky rhythms in Leonard Bernstein's Chichester Psalms in preparation for this Sunday's joint concert.

The event, "American Masterpieces," is scheduled for 3 p.m. in Kresge Auditorium of the DePauw Green Center for the Performing Arts.

Normally an animated man, Greg Ristow, director of choirs at DePauw and the ensembles' conductor, is uncharacteristically quiet, intently observing and taking notes on Joseph Flummerfelt's work, while seated among the tenors.

Flummerfelt, a 1958 DPU grad, has been on campus this week as part of DePauw's 175th Anniversary Distinguished Alumni Series, is working to help the students find the rhythmic vitality of Bernstein's greatest choral masterpiece.

"More marcato!" he pleads. "It has to be like one continuous crescendo."

The singers try again, but the great conductor knows it's not quite right.

"You're too buttoned-up, you have to let loose more, give in to a primal expression of joy." The choirs sing the passage again, and Flummerfelt exclaims, "That's it! I can see Maestro Bernstein on the podium when you sing it like that!"

He would know, having worked closely with Bernstein and the New York Philharmonic for many years.

The famed choral conductor's choirs have appeared in more than 45 recordings, including Benjamin Britten's "War Requiem" and Brahms' "Ein Deutsches Requiem and Schicksalslied" with Kurt Masur and the New York Philharmonic; Mahler's "Symphony No. 2" and a Grammy Award-winning Mahler's Symphony No. 3 with Leonard Bernstein; Puccini's "Tosca" and Berlioz's "Roméo and Juliet" with Riccardo Muti and the Philadelphia Orchestra; and Messiaen's "Le Transfiguration de Notre Seigneur" Jesus Christ with the National Symphony.

His collaborations with Samuel Barber include the Grammy Award-winning recording of the composer's opera "Anthony and Cleopatra." In 2004, his New York Choral Artists recording of John Adams' "On the Transmigration of Souls" was awarded three Grammys.

Previously, he was nominated for his Westminster Choir recording of Haydn's "Lord Nelson Mass" with Bernstein and the New York Philharmonic and for Berlioz's "Roméo et Juliette with Muti" and the Philharmonia Orchestra.

"He, more than anyone I know, has the ability to reach the emotional heart of a piece and inspire a choir to sing from their souls," says Ristow, recalling his time as a student singing under Dr. Flummerfelt during the maestro's guest residency at the Eastman School of Music.

Flummerfelt has led choirs and master classes the world over, and in over four decades of touring and teaching, he has conducted some of the nation's most gifted singers through both the New York Choral Artists, an organization that he founded and for which he serves as musical director, and the elite Westminster Choir, which he directed for 33 years at Westminster Choir College at Rider University in Princeton, N.J.

He delights, nevertheless, in working with the undergraduate voice students who, along with talented non-music majors, make up the membership of the university's combined choirs.

In Wednesday's rehearsal, both the conductor and the composition are demanding but the fervent workout is joyful and invigorating. "Bravo, bravo!" the maestro exclaims, as he releases the singers at the end of rehearsal.

"Working with Dr. Flummerfelt is indeed a delight. He is an incredible conductor and has brought us so far in only a few days," said Emma Scherer, a senior who will soon join the full-time staff of the Santa Fe Opera after graduating in May. "He expects a lot out of the students, but gives so much in return. I am truly enjoying hearing our choir so excited to be working on such a difficult but gorgeous piece of music."

"He views the world around him from a philosophical perspective," continued Hinz, the countertenor soloist for Sunday's performance. "Music isn't just an art; it's a deep human experience. As the conductor, his connection to the work allows him to draw the emotional content of the music from the choir, so that the audience ultimately experiences the performance not just musically but emotionally as well."

While growing up in Vincennes, he recalled spending hours in front of the mirror air-conducting Handel's "Messiah," a free recording of which came with his parent's hi-fi set. He began taking music lessons and playing the organ at his local church and was also the drum major for his high school marching band.

After high school, he knew he wanted to study music but was interested in other subjects as well, so DePauw was his final choice for attending college. As an undergrad, he was presented with additional chances to conduct through community churches, as well as at DePauw -- eagerly agreeing to every musical opportunity presented to him --including the popular Monon Review, The Collegians and numerous student-directed and composed productions.

All valuable experiences and opportunities to conduct in his view.

He later earned his doctor of musical arts degree in choral conducting and literature at the University of Illinois at Urbana-Champaign, studying under the legendary conductor and educator Harold Decker. And in 1971, he was invited to serve as director of choral activities at Westminster Choir College, an appointment he held until retiring from the position in 2004.

"His teaching and conducting have guided and inspired an entire generation of American musicians, singers and music educators. As a young singer, I benefited not only through all the onstage experience I gained in Princeton, but also through touring and in professional productions in Charles-ton and in Italy.

"Dr. Flummerfelt brings out the ultimate musical experience in both preparation and in performance. As a conductor, he makes music come alive; he draws it right out of the soul. By the end of rehearsal, after the work has been done, he barely conducts. Everything just emerges," recounts Paré. "The performance is taken to a level you never thought possible. You just make music."

Sunday's concert will be preceded by a 2 p.m. talk by Flummerfelt. General admission to the Sunday choral concert is $3; tickets for all students, seniors and children are free.

For additional information or assistance, persons may call 658-4827. Tickets may be purchased in person at the GCPA Box Office, located at 605 S. College Ave. or online at www.depauw.edu/music/tickets