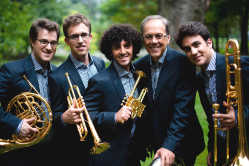 Local music lovers will have the opportunity to hear the world renowned recording artists The Canadian Brass perform live at 7:30 p.m. Friday, April 12 for the final concert in the DePauw University School of Music's 2012--13 Guest Artist Series.

Earlier in the day the ensemble will present a free lunch hour lecture/demonstration at 11:30 a.m.

Both events will be in Kresge Auditorium of the Green Center for the Performing Arts on the DePauw campus.

The famous ensemble is known for its signature blend of classical rigor and delightful showmanship -- in addition to the fact that they perform exclusively on 24K gold-plated Artisan Bach and Conn instruments.

Among the things that Craig Parť, director of DePauw bands, regards most highly about the Brass is the respect and esteem the ensemble has rightly earned over its 43-year history.

"From casual listeners to avid brass music fans, when the public hears the name Canadian Brass what comes to mind immediately is world-class musicians, exciting and unusual performances and a love of music-making. You can't help but be caught up in the electricity of a Canadian Brass performance because of their virtuosity, interesting programming, and the unique way they relate to an audience," Parť said.

The ensemble's repertoire Friday night will feature a wide-ranging library of original arrangements, many created especially for them, such as J.S. Bach's "'Little' Fugue in G Minor," arranged by trumpeter Ronald Romm, to "Killer Tang"o by Sonny Kompanek.

Among other selections on the program at DePauw are "Air on a G String," and their unique rendition of "Dixie Bach," a Dixieland adaptation of Bach's "Well Tempered Clavier" for brass quintet by Luther Henderson.

The well-traveled musicians pack houses everywhere they play throughout the United States, Canada, Japan and Europe. They were the first brass ensemble from the West to perform in the People's Republic of China, where they returned for an acclaimed five-city tour in 2010, as well as the first brass group to take the stage at the venerable Carnegie Hall.

On numerous occasions Canadian Brass has been invited by the Canadian Government to play for visiting heads of states, becoming one of Canada's greatest resources and musical ambassadors.

Education also plays a key role in the lives of the storied performers, all of whom are very much attuned to the need to train the next generation of players. As they travel the globe, they often pause to offer master classes and demonstrations for students and young audiences.

The ensemble is currently Artist-in-Residence at the University of Toronto, after having been Chamber Quintet-in-Residence for many years at the Music Academy of the West in Santa Barbara, Calif., and they have an innovative brass summer course at the Eastman School of Music.

Since original ensemble members and friends Chuck Daellenbach and Gene Watts first came together to form a brass quintet in 1970, Canadian Brass has compiled a discography of more than 100 albums. Several of the group's most recent CDs, including Canadian Brass Takes Flight; Stars and Stripes: Canadian Brass Salute to America; and Swing That Music: A Tribute to Louis Armstrong will be available for purchase after the performance.

General admission tickets to Guest Artist concerts are $10 in advance, $12 day of the event. Admission to DePauw School of Music events is free to all students, youth 12 years and younger, and seniors over 65 years of age, along as tickets are available.

Anyone wanting to attend a performance, who cannot afford to pay full ticket price, can also take advantage of the pay-what-you-can option.