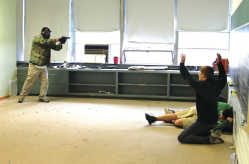 Putnam County emergency personnel held their annual active shooter training this week at the old Jones School in Greencastle. Personnel ran exercises in which they were placed into situations such as a school shooting, complete with hostages played by Area 30 Career Center Law Enforcement students. Indiana Excise officer Steve Teleos (above, left) played the role of the shooter taking out hostages JT Franklin (front) and Brandon Hutcheson.

With the rise in school shootings, it is necessary for emergency personnel to have specialized training to handle such situations.

Over the past week, more than 60 officers within nine police agencies participated in active shooter training at the old Jones School in Greencastle. Training was done Monday evening as well as Thursday morning in four hour sessions to ensure that all were able to participate.

"We tried to break it up for those who work the day shift or the night shift," Greencastle Police Department Assistant Chief Brian Hopkins said. "The whole county participated."

Training included hostage situations in the school, which were played by Area 30 Career Center Law Enforcement students, as well as active shooting, finding and stopping the threat.

The study also stated that post Columbine through 2010 there was a yearly average of four mass shootings. In 2011 there were eight and the total for 2012 through Thanksgiving was nine. Two-thirds of these incidents were found to be intervened by civilians and one-third by law enforcement.

"We know that they're on the rise," explained Indiana Excise officer and lead instructor Jerrod Baugh. "So, that's why some of our training is just with one officer and one shooter."

This week's annual training not only included law enforcement, but also gave a chance for school officials to have a look into the type of response that would happen if a situation were to arise. 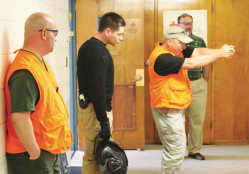 Indiana Excise officer Rob Miller (second from left) listened to instructor Jerrod Baugh (center) as he demonstrated the proper way to take out a shooter in a hostage situation as Greencastle Police Department Assistant Chief Brian Hopkins and Brad Johnson of Ivy Tech look on.

"Training has evolved from groups," Baugh said. "There are a large percentage of people now showing up just one or two at a time. During this training session they (school officials) just watched because they want to see what our response may look like. They also see why it's important to make sure we get into the building."

One thing is for sure, during a active shooter situation, one cannot wait for the SWAT team to arrive, an officer must go in whether it's alone or with backup, the longer one waits the more damage could be caused.

"It's a great opportunity to have a school for us to use," said Baugh. "It's the most realistic type of training. It allows our officers to be able to make decisions under stress." 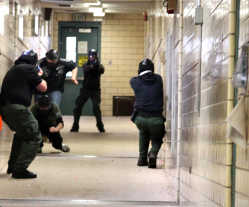 In fact, for the last 10 years agencies around the county have been training together to be better prepared for any situation that may arise.

"It's something we really try to do," said Baugh. "The response is with multiple agencies. Everybody comes out of the woodwork and responds at the same time."

Along with the agencies schools themselves in the county have their own safety specialists. Typically, each school has around three or four people who are specially trained to handle the any situation that may arise.

"Putnam County has one of the most active Safe School Commissions as a county in the state," said Assistant Director of Area 30 Chad Nunley. "Once a month we have a Putnam County Safe School Commission meeting. All the county schools are involved. Every other month all other entities come together to our meeting such as the police department, the fire department and more. Anyone that can have an impact or feels like they could be involved in school safety comes to meeting."

As far as the increase in school shootings go, training has not changed that drastically from what emergency personnel have been practicing for years.

"Nothing's changed in the aspect in the way we focus on the school settings," explained Baugh. "We try to train and use the percentages. We've been doing annual training for at least 10 years. It's not because of Newtown, it's just a continuation." 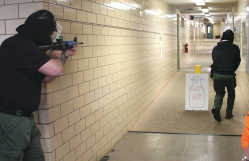 Baugh did state though that because of the increase in shootings, there is a far better response from officers.

"We may add to or change some of our training because of a shooting," Baugh said. "But we have not stepped it up, it's our same annual training."

The single most important thing officers were to take away from the training is that single-officer tactics should be emphasized in responding to an active shooter, multiple-officer tactics and exercise should not be used.