Improving our planet up to us all, Goodall tells crowd 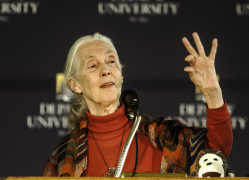 Starting her appearance with a chimp call and ending it with a call to action, one of the world's great conservationists spoke Wednesday night at DePauw University.

Renowned primatologist Jane Goodall welcomed the 2,300 spectators at Neal Fieldhouse with a guttural greeting like "you would hear if you came with me to Africa to one of the forests where the chimpanzees live."

The spry 79-year-old then proceeded to deliver a haunting chimpanzee call, much to the delight of a surprised audience, many of whom braved hail and thunderstorms to hear her Ubben Lecture remarks.

With "Sowing the Seeds of Hope" her topic, Goodall suggested it is everyone's responsibility to protect the environment and preserve the Earth's future.

"Think about the consequences every day," she urged, "and the small choices you can make" to make things better.

"We are destroying our only home," said Goodall, who spends all but 65 days a year traveling the world to inform people how our futures are threatened by depletion of natural resources, coupled with financial instability and a lack of political will.

Individually, she suggested, we can start reversing that trend.

"Every single one of us makes an impact on this planet every single day," Goodall stressed.

Goodall does see reasons for hope, most notably "the energy (and) commitment of young people who understand the problems and are empowered to take action."

World-renowned primatologist Jane Goodall shares one of her stuffed animal mascots with a Neal Fieldhouse audience at DePauw University Wednesday night as she presents an Ubben Lecture to a crowd estimated at 2,300.

But she also remains realistic about the situation.

"We can never put the world back the way it was," Goodall said, "at least not in our lifetimes -- but that doesn't mean that we can't make a major difference and slow down global warming and climate change and learn to adapt and put right some of the wrongs."

The little woman with the big message then asked the audience, "Is it too late to make changes?"

And offered her own quick response, "I don't think so."

Solutions to the world's problems, explained the conservationist extraordinaire, will require a combination of a "very clever brain and the human heart," Goodall said.

She also shared details of her life's journey as well as her ongoing efforts to protect chimpanzees and their habitats.

Goodall established the Gombe Stream Research Center in 1964 and it remains one of the longest uninterrupted wildlife studies in existence.

She established the Jane Goodall Institute in 1977, and in 1991, created Roots & Shoots, an organization designed to empower young people to work toward improving the environment and quality of life for people and animals. Roots & Shoots now exceeds 10,000 groups in more than 100 countries with participants ranging from preschoolers to college students.

As a child in London, Goodall said she was drawn to animals and books such as "Dr. Dolittle" and "Tarzan."

Regarding the latter, the chimp expert quipped that Tarzan "chose the wrong Jane."

Nonetheless, her exposure to the Tarzan tale initiated her love affair with Africa and fueled her determination to get there one day, as well as "of living with animals in Africa, and writing books about them."

She recalled beginning her career as secretary to famed British paleontologist and anthropologist Louis Leakey, "who spent his life searching for the fossilized remains of our Stone Age ancestors."

It was with his support that Goodall began studying the primate behavior that has made her world famous.

Along the way, she made findings that dispelled old beliefs. For example, she documented that chimpanzees are not vegetarians and, like humans, can construct and use tools.

"It became obvious," Goodall said, "that chimpanzees were far more like us than we'd thought before.

"Indeed," she added, "the thing that really strikes one is how much like us they are."

She concluded her remarks by urging the audience to get more involved in the future of the world.

"Just think," she offered, "if every single one of you is making choices each day to make things just a little bit better for the planet, what a difference just that would make."

If that were true, Goodall concluded, "you are definitely, definitely helping us to move toward a more sustainable future, toward a better future for all the unborn children, for my grandchildren and theirs, and yours who exist or will exist in the future."