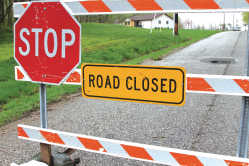 Two sinkholes on Jones Road south of Putnam County Hospital have forced the road's closure until county highway officials can determine their cause and a possible solution.

A pair of sinkholes that have emerged in the past week have forced the county to close a portion of Jones Road in southern Greencastle Township.

A Putnam County Highway official told the Banner Graphic that the hole in the middle of the road showed up about a week ago in the middle of Jones Road (County Road 300 South) just west of Hospital Drive.

Highway workers have attempted to fill in the first hole four times, but it has continued to grow.

The second sinkhole, on the edge of the road, emerged directly to the north of the first hole on Thursday.

Only a short section of the road is actually closed, but it does not allow for traffic to pass through between Hospital Drive and County Road 25 West.

Highway officials do not yet know the cause of the sinkholes, but will excavate the area on Monday in hopes of finding the problem and a solution.

It is unclear if recent heavy rains caused the problems, though they certainly cannot have helped. 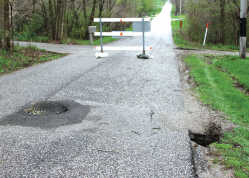 The rains caused flooding in other parts of the county, such as on the Bainbridge-Roachdale Road, which was closed on Thursday for high water.