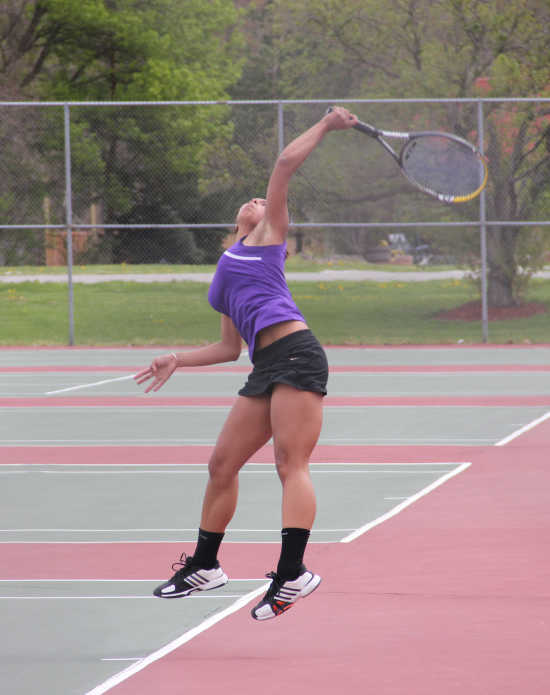 BRAZIL -- The Greencastle girls' tennis team came out with a spark on Saturday. The Tiger Cubs played their best tennis of the season and came away with a first-place finish at the four-team tournament at Northview High School.

GHS finished with the same team score as North Montgomery but won a tie-breaker based one games won. Northview was third and Linton finished fourth.

"I am proud of my team; I love being with them we're like a family," Watson said. "I decided to work harder and I'm really committed to tennis."

The two seniors led the way, but several other strong performances helped GHS get the win.

The Tiger Cubs finished second at No. 1 doubles, Bailey Brewer and Sabrina Arnold, and third at No. 1 singles, Haylie Romer.

The No. 2 doubles team of Courtney Smallwood and Rosemary Hurst finished fourth.

Greencastle was left a little shorthanded because of a band trip, but the squad responded well, GHS coach Sally Martin said.

Chadd remains unbeaten this year and many of the players, including Watson, are playing the best of the cleanest tennis of their lives.

Watson is a powerful, left-handed player who in the past tried to out-hit her opponents.

On Saturday Watson focused on shot-making, slowing down and using angles. Instead of trying to hit it past her opponent, she hit it around her.

"The word my coach uses is 'crisp,'" Watson said. "It helps to just slow down and not worry about my opponent and just focus on my own game. ... I'm more about strategies now than just the fundamentals."

Chadd went up 5-0 in the first set of her finals' match before beginning to struggle. She lost five straight games before eventually winning 7-5, 6-3.

Greencastle will get another chance to take on North Montgomery on Wednesday, this time in a dual meet.

The Tiger Cubs play at the Chargers at 5 p.m.