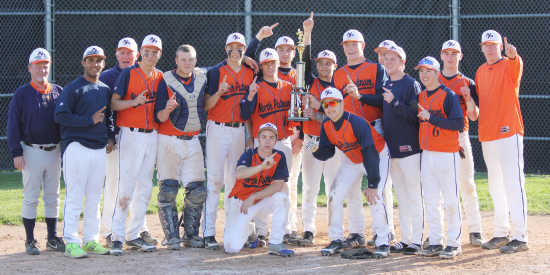 Becoming successful makes a baseball team a target, and when the North Putnam Cougars entered Saturday's 2013 Putnam County Classic at Greencastle, they were easily the most successful team of the season.

The Cougars (17-3-1, 9-1 WCC) wrapped up the West Central Conference championship on Friday and were perfect against the rest of the county, including two wins against rival Cloverdale.

Every team had its sights set on beating the Cougars, all the players from the other schools targeted them and when the Cougars beat Cloverdale 3-2 in the final game, the favorites became champions.

"It feels great as a senior winning this," NPHS senior Kyler Badten said. "We've got a rivalry with just about everybody in the county and the conference, but Cloverdale especially. It was nice being able to take them in the championship game.

"They're a great team, but it's definitely a rivalry there."

NPHS beat the Clovers three times this season and came from behind in each game.

Senior Will Andersen opened the scoring for Cloverdale. He tripled with one out in the first inning, then came home on a sac fly to deep center field by Austin Mannan.

Cloverdale (17-7, 6-2 WCC) added an insurance run in the fourth when senior Cody Carter laced a shot deep over the centerfield wall.

Tyler Carter had kept the Cougars' offense in check through the first three innings -- their only base runner reached after being hit in the second -- but things started to unravel in the fourth.

NPHS senior Jake Haste singled for the Cougars' first hit of the game and Tyler Carter hit Kaleb Belcher with the next pitch. He got freshman Kyler Jeter to fly out for the third out, but the period of domination was done.

Badten allowed a two-out walk to CHS senior Justin Wilson, then quickly picked him off first to bring in the bottom of the fifth.

"You never know (you'll come back), but we're a good hitting ballclub and we just started seeing the ball better," Badten said.

Tyler Carter surrendered a two walks and a game-tying RBI-single by Brody Perrine before being pulled from the game for Cody Carter.

He faced three batters without recording an out, including an RBI single by Badten that gave NPHS the lead, and was replaced by freshman Brayden White.

White quickly induced a 1-2-3 double-play ball to end the threat, but the damage was done.

"These kids have a resilience," NPHS coach Phil Webster said. "We started at 10 o'clock this morning. And sitting out there, down two runs, the game was just sailing right along, and then they found a way to win it."

Badten took down the Clovers' 2-3-4 hitter in order in the top of the sixth and CHS didn't muster a threat in the seventh, which gave NHPS the 2013 crown and allowed it to maintain possession of the Bucket, won during a regular-season basketball game.

To reach the finals, the Cougars first had to beat four-time defending champion Greencastle.

The Tiger Cubs (6-9, 3-5 WCC) have a young but prideful group that gave the Cougars fights in each of their three games this season.

NPHS and pitcher Jake Haste carried a 5-1 lead into the bottom of the fifth inning against Greencastle, but the Tiger Cubs fought back to tie it up.

Haste walked three hitters to load the bases with one out and bring up the top of Greencastle's order, senior Tanner Nicholson.

Nicholson's triple cleared the bases and he scored on a single by Holden King a few pitches later. King was picked off first base and Cole Pohlar grounded out, but the Tiger Cubs tied the game.

NPHS went ahead with a two-out rally in the sixth.

Three straight hits, including an RBI double by Perrine and an RBI single by senior Michael Herrmann, gave NPHS all the runs it needed.

The Tiger Cubs scratched one more across in the seventh, but Haste had enough in the tank to earn the complete-game win.

Cloverdale's path to the championship game was much less stressful.

CHS made quick work of South Putnam in game one, winning 2-0. Wilson earned the win, making him the winningest pitcher in the Clovers' history.

South Putnam (3-16, 2-8 WCC) got a strong performance on the mound by senior JD Briones, but couldn't find any offense against Wilson.

Cloverdale and Greencastle play a home-and-home to start the week and wrap up their WCC schedules, beginning Monday at Cloverdale at 5 p.m. 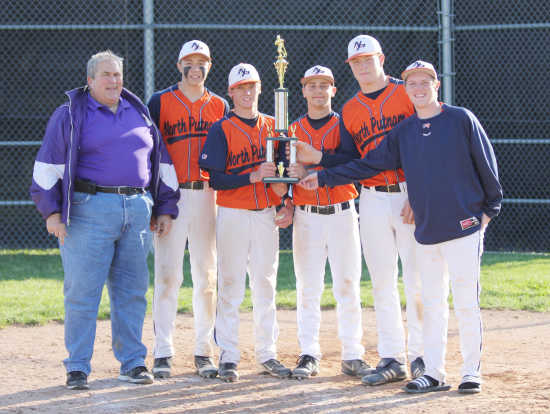