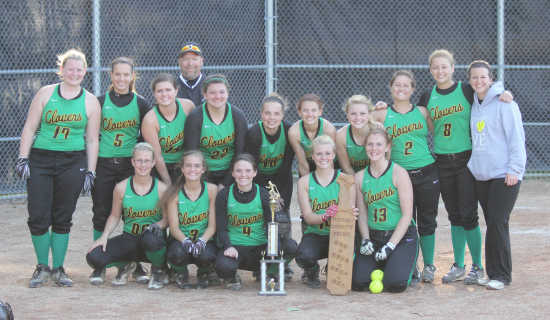 Like all those that preceded it, the 2013 Putnam County Classic softball tournament was unseeded. But to all the fans, Cloverdale looked like the biggest long shot.

The seniors on South Putnam's squad entered Saturday's game two having never lost to a Putnam County school. They had a 30-0 record against Greencastle, Cloverdale and North Putnam in four years.

"I never dreamed coming here today that this is what it would be," CHS coach Brian Knapp said, "They told me when we got off the bus (before the games started), 'Can we get in the pool after we win this?'"

Like cutting down the nets in basketball, jumping into the hosts' swimming pool is a tradition after winning a county tournament.

The win over the Eagles surprised even the players.

"It's so cool. I never expected it. Not in softball," Bradanne Toney said. "I was expecting it to be 1-0, just like all the other games we've lost recently. Our defense is usually there and our bats aren't. Our bats just turned on today. I was definitely not expecting this, but it brings up memories from volleyball and now I'm glad to have them for softball, too."

Toney, a senior for Cloverdale -- and Varvel's cousin and best friend -- came to the plate in the bottom of the fifth with one out and one on. She blasted a massive home run over the left field wall at Greencastle's field to split the deficit in half.

Heather Goss scored on a single later in the inning and the Clovers trailed by one.

After an uneventful sixth, South Putnam brought the top of its order to the plate with a one-run lead in the top of the seventh.

Varvel walked to lead off the inning, but Cloverdale's pitcher, senior Katt Raisor, retired the next three hitters in order.

Raisor's brilliant game gave Cloverdale a chance to win it in the seventh, which is all the could be expected from a team entering the game with three wins going against the two-time defending state champions.

Toney led off the seventh. Her solo home run cleared the centerfield wall by 20 feet and tied the game. 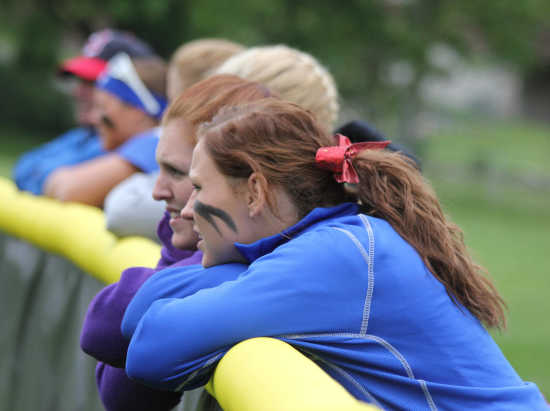 "I tracked the ball really well, which is why I hit good," Toney said. "I think that growing up with (Varvel) and always spending so much time with her that I was just really comfortable in the box. I really think that's what it was.

South Putnam coach Chris Jones walked to the mound and talked to his team, deciding to leave Varvel in. She had been dominant, save two pitches to her cousin.

Varvel's hit the next batter, freshman Lauren Patterson. Goss attempted a sacrifice bunt and it was placed so perfectly she reached base. Junior Adrianna Patterson singled to load the bases.

Tie game, nobody out in the bottom of the seventh.

Madison Smith hit a ground ball up the middle, but Varvel -- primarily an infielder for the Eagles -- picked it up and fired to get a force out at the plate.

One out, bases still loaded. Junior Beka Jordan at the plate.

"Beka Jordan was a monster in the outfield. She ate up everything," Knapp said. "All I ever do is bunt the poor girl, because I never let her swing. I don't know what to say. I'm overwhelmed."

Her soft single rolled through the right side of the infield, seemingly in slow motion, inching just past the reach of Varvel and second baseman Brooke Cundiff.

By the time it reached first baseman Nikki York, Goss was crossing the plate.

"That win right there made my season," Knapp said. "It tells me that they're getting better and they're prepared for sectionals. I think they're ready. I hope."

And that was just game one.

"I was expecting a close game with South Put, because we've been playing defense really well lately," Raisor said, "But I don't know if I was expecting to win it." 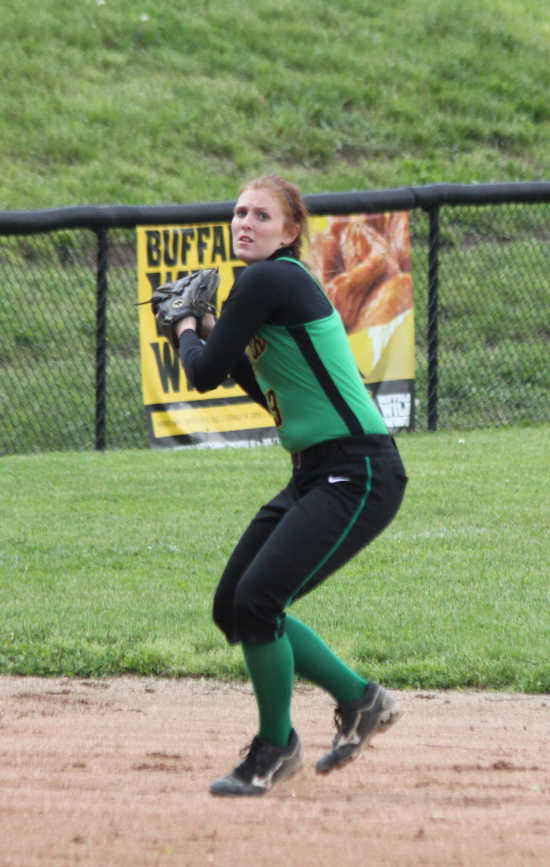 Cloverdale entered the championship game against North Putnam with as much momentum as any team can have, but the Cougars had an edge.

"I've got a bunch of girls, but I don't have many that play travel ball," Knapp said. "They work hard. They work extremely hard, but they haven't been getting wins that they should be getting. But they're getting better."

Sophomore pitcher Sabrina Surber was confident, coming off a decisive 4-1 win against Greencastle (5-13, 0-8 WCC) in game one. She allowed just two hits against the Tiger Cubs and had seven strikeouts.

Surber came to pitch in the bottom of the first inning, Cloverdale's metaphorical momentum came to the plate and Surber struck it out.

By the end of the third inning, Surber had eight Ks. With her control the best its been all season, Surber was confident and carried herself as such.

When the game ended, she had struck out everyone on the Clovers -- save Toney -- at least once. She had 12 strikeouts and allowed two hits in eight innings.

But she watched the Clovers' first game and realized she wanted no part of Toney, who walked four times. There was no reason to give Cloverdale's best hitter a chance to do damage.

"It was fun (being intimidating)," Toney said. "I scored. If they wouldn't have walked maybe, maybe I would not have gotten on base and scored one of the runs that was to win the game."

As sharp as Surber was, Raisor was her equal.

The two teams went through the first four innings without a runner getting past second base.

NPHS finally broke through against Raisor in top of the fifth.

Junior Kayla Fish reached on an error, was sacrificed to second, then moved to third on a single by senior Lauren Campbell. Senior Cayla Kientz' bunt scored Fish, the junior Bailey Ault knocked in Campbell.

TyeAnn Strow singled to load the bases, but Raisor got Surver to pop out to end the rally.

The kismet Clovers answered right back. Freshman Kim Winders walked with two outs, then Toney joined her. Lauren Patterson singled and Toney scored on a pass ball to tie the game.

The 2-2 scored held through the top of the seventh. With one out in the bottom of the seventh, sophomore Jess Winders reached on an error. Toney and Lauren Patterson walked to load the bases with two outs.

Then Surber did what she did all game and struck out Goss to send the game to extra innings.

North Putnam's offense got going again against Raisor in the eighth.

With an International Tiebreaker runner, Strow, on second, Surber walked to lead off the inning. Senior Katie Welch singled to load the bases.

Freshman Lauren Johnston hit a ground ball to third, and Patterson gunned Strow out at the plate.

Fish sacrificed to score Surber and the Cougars took a 3-2 lead into the bottom of the eighth.

"That's the way they've played all season," Knapp said. "They don't like to make it easy on me. I don't have gray hair for no reason." Goss took her spot at second base and Surber struck out Adri Patterson to start the inning. The pitch was too filthy for Patterson, but it was also too filthy for the catcher. Albers threw Patterson out at first, but Goss advanced to third on the play.

To the plate came Smith. She doubled in Goss to tie the game, Cloverdale's second hit of the game.

Jordan, the Clovers' hero from game one, was up again with another chance to win the game. Another runner on third. Another one-out situation. Another ground ball.

First baseman Bailey Ault picked it up and fired to first, but it got away. Smith came storming around third base. Surber, after giving up just 4 hits in 15 combined innings, took the loss.

Raisor, who pitched on Friday in a loss to Cascade, earned the win by throwing 22 innings in less than 24 hours.

"It's super exciting," Raisor said. "Everyone had something to contribute today. It wasn't a one-man win."

The Clovers' 4-3 win gave the team the Putnam County Classic victory and control of the Pride until at least the fall.

"It's coming," Knapp said. "The defense is strong. If we can just get the bats going. Today they got them going. I've been waiting all season and today they came to life." 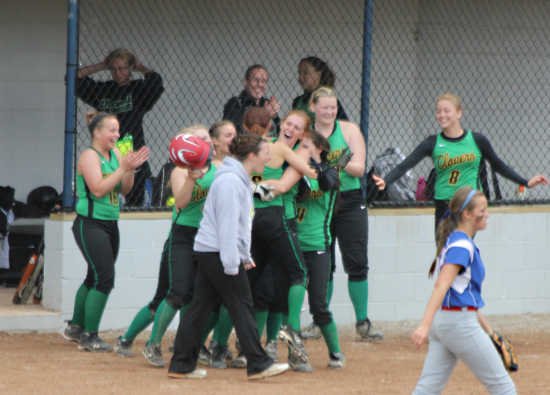 The Cloverdale softball team celebrates after beating South Putnam in the first round of the 2013 Putnam County Classic softball tournament on Saturday. (Banner Graphic/GRANT WIEMAN)