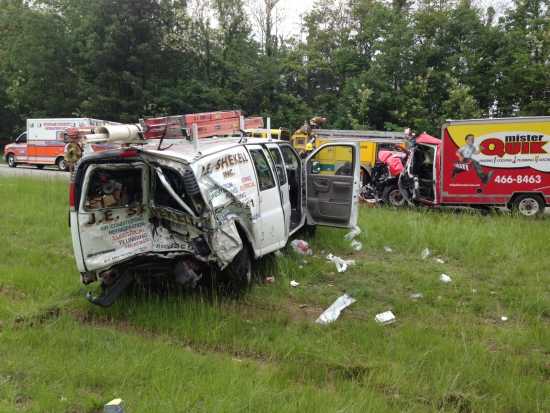 An accident occurred early Thursday evening on westbound I-70 as a Brazil man driving a box truck (above, right) crashed at full-speed into two vehicles, which were stopped due to construction traffic. Photos courtesy of Jon Chadd.

CLOVERDALE -- Westbound lanes of Interstate 70 were shut down for more than an hour early Thursday evening after a motorist drove full speed into stopped construction traffic. 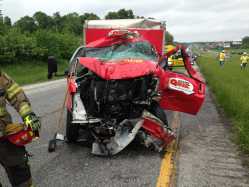 A view of the front of the box truck, which crashed into two stopped vehicles on I-70 westbound near the 40-mile marker.

At 4:41 p.m., the Putnam County Sheriff's Department responded to the crash in the westbound lanes of I-70 at approximately the 40-mile marker, just west of Cloverdale.

Investigating Officer Sgt. Jon Chadd reported that Matthew Farley, 24, of Brazil, was driving westbound in a utility work van when he rear-ended two vehicles, which were stopped due to construction traffic.

"He apparently did not see traffic stopped and he rear ended them at full speed," said Chadd. "He hit the first vehicle so hard it was knocked off the road and as he continued he rear ended a second vehicle."

Farley initially collided with another full-sized commercial work van, which was driven by Michael Kiesler, 36 of Wadesville. In the vehicle with Kiesler was Nathan Knight, 30, Evansville. 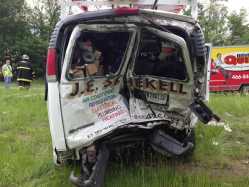 A view of the back of the first vehicle hit, which resulted in serious by non-life-threatening injuries.

He then went on to hit the second vehicle, another full-size work van, driven by Benjamin Sipes, 39, of Beech Grove, who also had Christine Beck, 55, of Beech Grove with him.

"It was not a construction zone where the accident actually took place, but there was construction up ahead," Chadd said. "Witnesses say and evidence indicates that the Farley vehicle never applied his brakes."

Following the crash, Farley had to be extricated from his vehicle and was lifelined to Methodist Hospital with serious, but non-life-threatening injuries.

Kiesler was also transferred to Methodist Hospital with serious, non-life-threatening injuries, while Knight was transferred to Union Hospital in Terre Haute with significant injuries including broken bones. Both Sipes and Beck were treated for injuries at the scene and released. 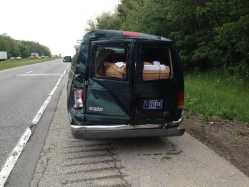 A view of the second vehicle hit during the Thursday evening wreck.

As of Friday morning all remained in the hospital.

Interstate 70 was later opened up at approximately 6:10 p.m. after all westbound lanes were shut down.

Authorities say that the cause of the crash is still unknown. However, Farley was believed to have been distracted at the time.