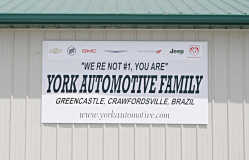 The Putnam County Fair may be only 10 days each July, but the fairgrounds is in use year-round.

A pair of new signs recently installed on two fairgrounds buildings are indicative of that year-round use and the year-round commitment of local organizations to the upkeep and improvement of the grounds.

York Automotive is now the sponsor of the community building, while Farm Bureau Inc. sponsors the indoor arena.

Fair Board officials said they approached a pair of organizations they thought could also benefit from their continued involvement with the fair.

"York is the only car dealership in Putnam County," Fair Board president Steve Greeson said, "so we focused on them because we thought it would benefit them."

Nick York agreed, saying the auto dealer looked at the sponsorship as a mutually beneficial opportunity.

"For the past 25 years, we've been pretty involved at the fair," York said. "We look at it as a good way to support the community and to market to people who buy our product.

York said when approached by the Fair Board, it seemed like a good way to support improvements to the fair and to keep the York name in the public eye.

"They've worked hard to bring the crowd back to the fair and return it to what it once was," York said. "Growing up, we always went to the fair at least one night, and so did everybody in the county."

For Putnam County Farm Bureau Inc., sponsorship of the indoor arena seemed to go hand-in-hand with its ongoing efforts to support agriculture in the county.

"For many, many, many years we've contributed to various programs at the fair," said, Farm Bureau president Steve Cash, who is also a former Fair Board president. "We do a lot at the fair anyway, so this is a good fit. It is a mutual benefit, I think." 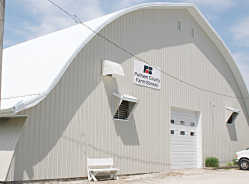 Besides supporting fair week activities, Cash said Farm Bureau sponsors a number of events at the fairgrounds throughout the year, such as Ag Day each March.

"The state has been telling us that we need to be more visible in terms of our name," Cash said. This includes reminding the public of Farm Bureau's sponsorship of things like Ag Day, as well as the Friend of the Farmer and Farm Family of the Year awards.

"We're trying to make more awareness of what we do."

Sponsorship of the building is just another way to remind the public of Farm Bureau's presence.

Besides the nominal support of the fairgrounds, Greeson said the sponsorship of the two buildings brings much-needed funds to keep the fairgrounds running and improving.

"It means a lot to us because that's our only income, really, other than fair week," Greeson said. "Our goal is to use that money to make those buildings and the fairgrounds better."