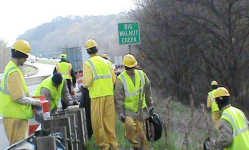 PUTNAMVILLE -- It was a strange spring to be out working in the elements, but offenders at the Putnamville Correctional Facility (PCF) were able to haul in 3,129 bags of trash and debris from Interstate 70, exceeding last year's total.

"Cleaning up Hoosier highways is one of the ways that offenders can give back to the community and turn doing time into doing good," IDOC Commissioner Bruce Lemmon said.

Correctional Sgt. Gary Goss, Officers Richard Phillips and Cody Worthington and 12 offenders spent 90.5 hours picking up trash on 40 miles of roadway from the Putnam /Clay County line to Monrovia on I-70 (east and west).

"It was difficult this year because we've had a lot of rain to contend with, but we were able to pull it off," Goss said.

The annual event has evolved into a competition between IDOC facilities to see who can collect the most trash.

"The numbers aren't all tallied yet, but whether we win, lose or draw, I thank staff and offenders for their efforts, and remind all that the true winners of this competition are the residents and visitors traveling the roads of Indiana."

To find out how your group can become involved in helping beautify an area near you by participating in Adopt-A-Highway, Sponsor-A-Highway or other highway beautification efforts, contact INDOT Greenfield District Customer Service at 1-855-463-6848 or email eastcentralin@indot.in.gov.