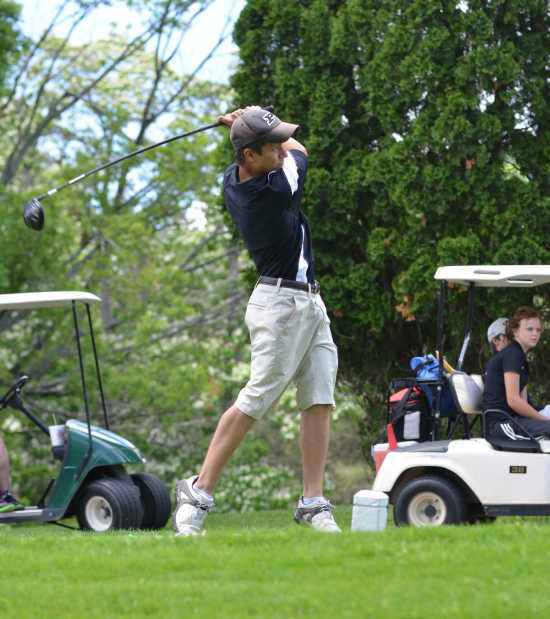 Cloverdale junior Aaron Whitlock tees off during the Martinsville golf sectional on Monday. Whitlock led the Clovers with an 88. (Banner Graphic/TRENT SCOTT)

MARTINSVILLE -- With rearrangement of the IHSAA Boys' Golf Sectionals seeing the rest of the Putnam County schools moved to Crawfordsville, Cloverdale was left to fend off the Hendricks County big drivers at Martinsville Golf Club alone.

Aaron Whitlock led the Clovers with a round of 88, followed by an impressive round from Devin Bassett, who shot 89.

Freddy Fislar carded a 90, Chase Snyder came in at 93 to round out the team score and Rylan Mattocks played a round at 96.

Cloverdale head coach Doug Wokoun said that the scores at Martinsville were surprising.

"There's a big difference from probably the last three years in everybody's scoring," Wokoun said. "I'm not sure, given how nice it is today, why that happened.

"There were six teams coming in here that felt like they had a chance to win and that might have inflated scores a little bit by itself. Considering how much it rained over here the other day, I thought the course was in really good shape.

"I was encouraged by what I saw and we shot a pretty good front nine today."

The Clovers came in after nine holes with all five scores between 42 and 45. Wokoun was impressed with the effort even if things did not go as smooth on the back half of the course.

"I'm pleased with everyone on the front," Wokoun said. "Devin Bassett in particular played well on the front and except for the last hole, played pretty well on the back as well.

"When we made the turn, I was feeling pretty good. On the back nine, we did not play as well. We had some frustrations from the front nine.

Weather and a lack of matches may have made it more difficult for the squad to play 18 holes at a high level, something Wokoun said that needed to be looked at.

"With each of these guys, the last two and a half weeks have really been tough because we've only had one match in all that time," Wokoun said. "One of the things we have to do something about is to look at our schedule so that we're not standing around at the end of the season waiting for the sectional."

With all five sectional golfers returning, Wokoun said that the squad had the potential to be in a good position next season at the sectional.

"One of the things when I look at our scores and I think of where we ought to be, we're not that far away from where we shot today," Wokoun said. "We have everybody coming back and if they work over the summer like they say they are going to, those strokes that they felt like they cannot lose will start to go away over the summer.

"I'm pretty confident we're going to be alright next year."