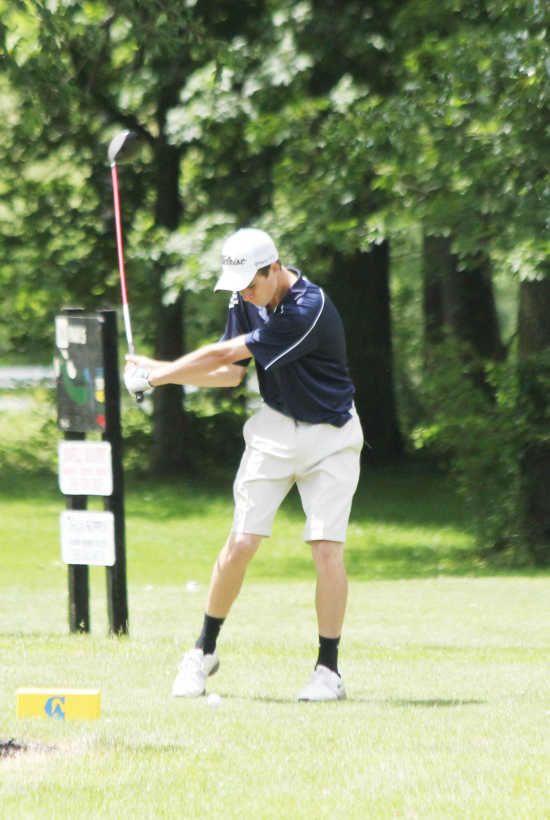 CRAWFORDSVILLE -- The North Putnam boys' golf team began the season with a confidence they'd never had before. The group believed they could make it to regionals.

On Monday, for the first time in school history, that became a reality. The Cougars finished second at the Crawfordsville regional, just behind Greencastle, and shot a 345.

Leading the way was junior Bennett Hazelgrove, who shot an 82 for the best round of his career at just the right time.

"When he came in, I knew he was going to be a strong player," NPHS coach Linda Patrick said. "He's put a lot of hard effort and hard work into his game this year. I call him the pivotal player.

"His scores have been real consistent and I just knew that in the last couple meets that he was going to come in with some great score, and it was today and it was a happy day for him and us."

Hazelgrove was playing as the fifth golfer for North Putnam, making his impressive round (he tied for fifth-best of the day) all the more improbable.

Even without him, the Cougars still would have finished the event in second place. North Putnam's fourth and fifth scorers, Jake Smith and Austin Judy, tied with a 91. Only Greencastle had a better fifth score.

The Cougars depth was a product of hard work throughout the season, Patrick said.

"This season we all felt like we could probably be in the top three," she said. "The guys put it all together today."

Danny Smith shot an 84 for NPHS and Mason Asher an 88.

NPHS was one of the first teams to go out on the course, so although they were the leaders in the clubhouse, the team had to sweat it out for more than an hour for the final scores from third- and fourth-place Crawfordsville and Southmont be reported and make the regional qualification official.

The two teams tied at 363, with Crawfordsville advancing based on its fifth score.

"I am exhausted from waiting for those scores to come in," Patrick said. "That was a little edgy. I felt comfortable coming in, the boys felt comfortable, but you never know what somebody can shoot."

While the Cougars hadn't had much postseason success coming in, Patrick said the squad was confident based on their results so far this year and the quality of competition at the sectional.

In past years the Cougars had played at Martinsville.

"Being in the sectional we were in, and looking at their scores, I felt like we could be in the top three," she said. "We played all these schools but two this year and pretty much beat them all, so it just felt like we could do it and we did."

The group is excited to advance but they'll have a tough road ahead. Their 345 is one of the highest team scores to qualify for Thursday's Washington (Country Oaks) regional.

"It's a new location for us and for (sectional champion Greencastle)," she said. "I don't have any expectations yet. ... I'll have the kids tell me what were some troublesome things (at sectionals). You see them play during a meet like this, but you can't watch them every minute. I'll have to rely on what they can tell me and go from there.

"They just need to get their mental mind together and focus on the course and not worrying about the past and future. Play in the present and that's how I'm going to prepare."

Golfers begin teeing off at 8:30 a.m. on Thursday.