'You're a good man Charlie Brown' 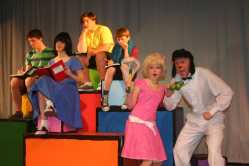 The 52nd season of Putnam County Playhouse opens this evening with the musical "You're A Good Man, Charlie Brown."

Brad Sandy is the director. He has previously directed "Cinderella" and "Arsenic and Old Lace," among other shows. Sandy has also most recently appeared onstage in "Singing In the Rain" and "Camelot." Musical direction is by Debby Lambert, and choreographer is Lita Sandy. Lambert most recently appeared at PCPH in the title role in "Hello, Dolly!" Lita has choreographed many shows and most recently directed "Cheaper By The Dozen." Pit conductor and pianist is Marilyn Burdsall. Percussionist is Dede Schwomyer. Both have worked musically on many productions at PCPH.

Playing the title role of Charlie Brown is Cameron Callan who last appeared at PCPH in Thoroughly Modern Millie. Callan will be joined by Michaela Semak as Lucy, Lucas Marsh as Schroeder and Cassie Roberts as Sally Brown will be making their PCPH main stage debuts. Alex Asbell will play the beagle Snoopy and Donovan Asbell will play Linus. Alex was also in "Thoroughly Modern Millie" last season and Donovan was in "The Music Man."

Working on the technical side are Alyssa Chew as assistant director and Jessica Long as stage manager. Stage-hands are Isaiah Long, Maurice Long and George Howard. Costumes are by Sarah Bond. Matt McClaine and Craig Armitage are responsible for the sound design, and Meghan Armitage will run the light board.

The musical is based on the cartoon strip, "Peanuts" by Charles Schultz. The original music, books and lyrics are by Clark Gesner. Additional dialog is by Michael Mayer, and additional music and lyrics are by Andrew Lippa. It first opened Off-Broadway in 1967. The revival on Broadway in 1999 received four Tony Award nominations, and won two of them, for the performers playing Sally Brown and Snoopy.

To make reservations call the box office at the Hazel Day Longden Theatre at 653-5880 from 5 p.m. to 7 p.m. Monday through Saturday.

Sponsor for the production is Headley Hardware and Rental, Greencastle.